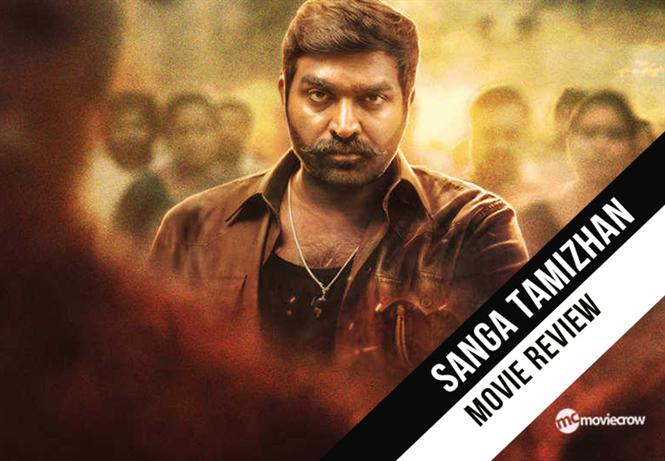 Makkal Selvan Vijay Sethupathi’s latest venture, unlike his usual experimental films, is the commercial entertainer Sangathamizhan directed by Vijay Chander. With Raashi Khanna and Nivetha Pethuraj playing two female leads and Soori serving as the comedian, the film takes place at two different places namely Chennai and Theni district. What does this urban-rural mix of a formula film have in store for the Vijay Sethupathi fans and general audiences?

Sangathamizhan is about Murugan, a Chennai based guy aspiring to become an actor played by Sethupathi. He meets the heroine Raashi Khanna and his carefree yet caring attitude is something she falls for. Simultaneously we are shown a bunch of goons lead by a businessman who is none other than the heroine’s father. To add to these two usual tracks, there is a third story that takes place in Theni where we are introduced to Tamizh and his family alongside an entire village that is trying to stop a copper based corporate company from building a factory in their village. What do these tracks have in common and how they intersect forms the rest of the story.

On paper, this plot does sound like a lot of other mass hero films and the execution too, is not very different. However, the casting is something that has saved a large part. Vijay Sethupathi sizzles as the mass hero and both as Murugan and Tamizh, though there aren’t vast differences in mannerisms, he entertains. Raashi Khanna and Nivetha Pethuraj too do a decent job with their characters. Soori’s one liners work in places and Mime Gopi has a small yet nice character in this film. What could have been better are the characterizations of the negative roles as they barely leave any impact on us.

The film has the usual 5 songs, 4 fights and a twist in the climax and some of the family based emotions and elements have worked in favour of the makers. Unlike the director’ previous film, the family portions seem more natural than the action and thrill. Some mention worthy scenes include the one that has Vijay Sethupathi explain to a girl’s dad about abortion and the options that a father has in a practical manner and some other romance scenes between Raashi and Sethupathi. Few cinema based examples and discussions between Soori and Sethupathi also spark a smile. The second half though had ample space for such worthy scenes but it is sad to state that we barely get excited towards what happens.

Technically, Vijay Chander’s team has tried to deliver the goods required for this sort of an entertainment film. The flashy cinematography by Velraj during the song portions and fights seem quite like a deliberate move. Edit by Praveen KL is just about alright and music by Vivek Mervin is decent. The Kamala Kalasa song is hummable and the background score is fairly engrossing at times. A lot of good things have been spoken about in this film but there is barely any depth to any of those issues. There is a scene about planting trees and that is all, we do not have any concentration on such portions. Similarly, the factory issue seen in films like Kaththi have also been touched upon in a very light manner. The intention obviously being a good one but one would expect a slightly more depth filled execution and intensity.

Some of the fight scenes could have been a little less usual and the placement of twists a little more unpredictable.This predictability factor is a very important one in commercial films and they almost decide the result of the picture. If for a few more suspense filled moments, Sangathamizhan might have come out as an enjoyable family based, action entertainer. However, there are a few decent points that Sangathamizhan has in store for Vijay Sethupathi fans and the usual family audiences.

A typical, average entertainer that has a few Sethupathi moments and a couple of good family based scenes!