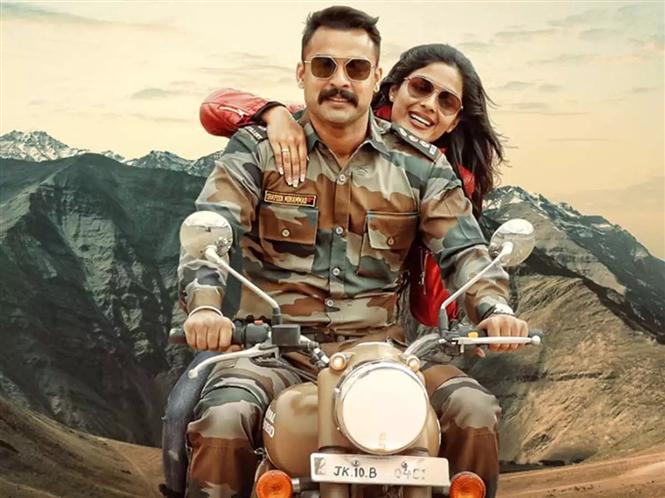 Edakkad Battalion 06 directed by Swapnesh K. Nair is your any day go-to little Malayalam cinema that revolves around a small town. The film has a vibe to it. It is primarily built around a military officer and how the town, his family and the entire society looks up to him.

The film do have interesting set of characters. Like that of a gossiping old woman who would do anything to sneak a puff of cigarette.. Like a father who suffers a late-life existential crisis when he realizes he no longer knows how to cook Biryani in gas stoves.. He calls his wife 'Member'. There are also a bunch of boys who sit in a bridge culvert, do and sell band-aid drugs. These shades are innovatively branched out. But nothing comes together.

Tovino Thomas, as usual, does his part well and good. There is nothing not to believe about the warmth he establishes with the other characters. A very convincing Samyuktha Menon plays his love interest. Sadly she comes on and off for songs. Shalu Rahim, is here to play the wasted brat again. (What's up with constantly casting him as a long haired dope addict listening to weird EDM tracks?)

Sinu Sidharathu's cinematography succeeds in capturing the localness and small-town vibes of the place. (The shot where Tovino stands in the culvert and as the camera comes down, you see a boy doing drugs is a vibrant piece of an image) The set piece of a fire accident is quite impressively executed. Kailas Menon's soundtrack is amusing. But as the writing goes haywire, after a point one easily gets dissociated from the film!

What does the father - biryani connect adds to the story other than him referencing to it later to call off a marriage saying 'Matter of hearts are as same as Biryani. Can't have it once it is spoiled!'. Why the aunt character is flexed almost like a villain for a drama to take over in the second half? She helps a random bunch of guys who wants her to ill talk about her own brother's son for a pack of cigarette and alcohol!??

And the climax! What was that? Out of nowhere, the film drops into a peaking fall. The twist doesn't evoke neither an emotion nor a shock. And the extended fifteen minutes of melodrama following that.. dilutes whatever little the film achieved till then! The post credits feature a long list of military martyrs and film does try very hard to make us connect it with this real life valourisms. But! Post spending almost an hour and half on fun, heroism and romance.. how can we be suddenly invested in a military angle that barely comes for 15 minutes?

Bottomline : Edakkad Battalion 06, starring Tovino Thomas is a vaguely written action drama that leaves so many loose ends to connect and rushes to a dramatic end with no valid arc or need for it!