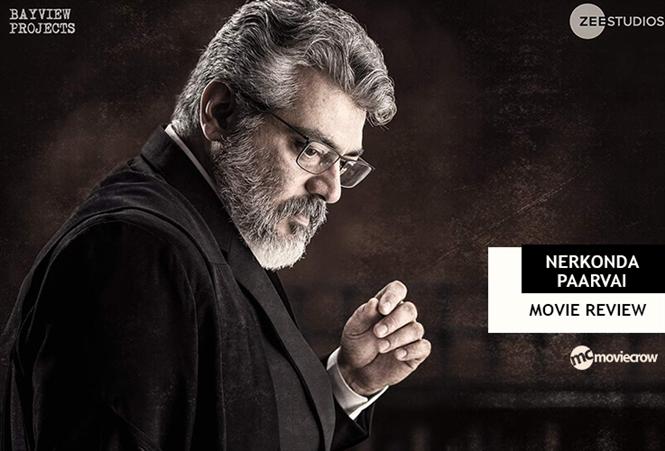 Actor Ajith has his next release in the form of Nerkonda Paarvai, a Tamil remake of the Hindi film Pink. Directed by H.Vinoth, the film is a court-room drama with an essential message sprinkled all over its 2 hour 38 minute run time. How does Nerkonda Paarvai work for the audience?

Ajith plays lawyer Bharath Subramaniam, a man suffering from a dreadful past. Incidentally, there are 3 girls who live opposite his new house and they face a very dangerous issue in the form of 3 typically rich, young, influential and spoilt guys. The girls are in complete fear after a shocking incident that they were a part of, post an EDM party at which one of the girls performs.

Shraddha Srinath plays Meera Krishnan, the girl who initiates the dinner after her dance performance and Andrea alongside Abhirami play her two friends. The performances of all the 3 girls are good but needless to say, Shraddha is a show stealer and her emotions live up to the remake’s expectations. Among the young and spoilt guys, Arjun Chidambaram as Adhik, the guy who is accused of physical assault seems to be a seasoned performer and does well with his part. Director Adhik Ravichandran and Ashwin Rao do a good job as his two friends who have a part to play in this crime. Nerkonda Paarvai is all about these 6 characters and Ajith as lawyer Bharath, who heads the case that has them all entangled.

Another mention is Rangaraj Pandey as the criminal lawyer opposite Ajith. He puts out a good show too and it is safe to say that director H.Vinoth has extracted the best from all his actors. To everyone’s surprise, the first few minutes do not even feature Thala Ajith and this is a very bold move. There are barely any compromises made for the sake of a remake and it is noteworthy to mention the fact that someone of Ajith’s stardom has decided to go with content as the king. Even the pre-interval block fight sequence followed by one stand-alone mass scene for Ajith, seems to be organic and does not seem too forced.

Technically too, the movie has positives around it. Be it Yuvan Shankar Raja’s background score or the cinematography by Nirav Shah, most of the work is commendable but what makes Nerkonda Paarvai the film that it is, is the lack of adulteration.

The court scenes have Ajith performing really well and the latter half is a treat for those who like content oriented, sensible stuff. There is no over the top acting or silly mass punches and fights to cater to the fans of the star and this deserves due credit.

The only possible points that could have been better were the flashback between Vidya Balan and Ajith that seemed a little misplaced and a few scenes that build up to the courtroom drama. For those who may not like too much of English in the film, this could be a tad bit alien and for some others, the base concept/idea, could be a little informative.

The idea revolves around the point that when a girl says ‘NO’, she means ‘NO’. This has been given utmost importance like in the original film. Nerkonda Paarvai also touches upon some of the ironically stupid beliefs that we as a society have about our women and this has been well etched out. If a girl likes to drink, laugh or even talks to her guy friends in a friendly manner, that does not mean she wants to sleep with them and this is completely focussed on with some superior execution.

On the whole, Nerkonda Paarvai is a worthy watch with a very necessary and meaningful message. Ajith sizzles as lawyer Bharath and lets his co-actors take the stage to perform whenever the script demands for it. Be it the 3 girls or the 3 guys, all of them are given space and the razor sharp dialogues in the latter half would attract film audiences. One concern may be the lack of masala for the fans of Ajith but it is a very progressive move that may churn out many such good, content films from our superstars!

Bottomline: High on content and low on compromise, Ajith’s Nerkonda Paarvai is a quality watch for film fans! The well delivered message also keeps a check on our so called ‘ethics’!