Game Over Review - A not to miss breathtaking experience! 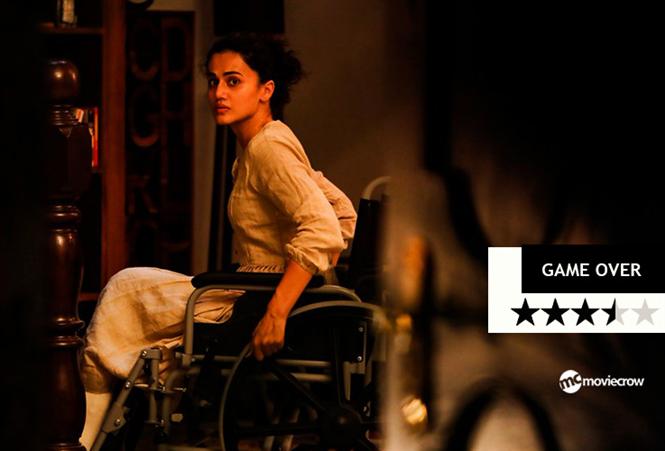 Game Over - A not to miss breathtaking experience!

How often do we see an edge of the seat psycho thriller with the sentiments intact and no ‘taken for granted’ sort of scenes? Game Over directed by the brilliant Ashwin Saravanan starring Taapsee Pannu, is one such film produced by the renowned Y Not Studios in association with Reliance Entertainment. Why does ‘Game Over’ stand above all the other films that come under this genre? Read further to find out.

With the first frame established on a handycam sort of setup of a food delivery executive giving away a parcel to the subject that we are introduced to, the maker leaves no second wasted and gets us interested from the word go. The film starts off with a psychotic episode, that plays a very vital part forming for the core of the rest of the plot. Taapsee plays Swapna, a video game addict who lives away from her parents by choice. She dreads the New Years eve due to a very unfortunate event and all these details are so important for both the characterizations as well as storytelling.

Taapsee lives with Kala ma, a maid played by Vinodhini and what happens to them through a course of events forms the rest of the story. Taapsee can be termed as the pillar of the film and she emotes to perfection. Be it her depressed self or after she gets onto the wheel chair, she is a show stealer. It actually gives us the feel that we are crippled to our seats and there is nowhere to go at some points in the film. Sanchana is seen in a brief flashback portion and this talks about cancer survival, fighting one’s fears, etc.This portion is soulful and the sentiment seen in this sector is unique. The entire film does deal with issues like rape, cancer survival, women safety, suicide and mental healt issues that we might have seen before. But what sets the film apart is the treatment and technical brilliance.

It is easy to say that the sound design is captivating. However, the fact is that the makers have gone in for an entire shot by shot scripting process for the entire audio medium just as one would do for the visual medium. This has worked out a wonderful magic for Game Over and has kept the audience glued to the screen. Just when we begin to question why certain events take place and why the killers wish to murder the characters, the sentiments alongside the motive of the protagonist takes over and does not let us ponder over anything else.

The verse ‘Video games ruined my life. Good thing I have 2 more’, is seen in a top angle shot. This is basically the entire film’s theme in one line. What if life were a video game with 3 lives and you have to make it through? This is exactly what the second half deals with and the elements that were established in the first half form for the body of the second. Most of the mention worthy sequences take place in the last half an hour and some might feel the film has a hurried pace towards the end with a lot of the story only revealing in the last few minutes. However, a majority would just cherish this experience and not question the pace of the first half as they would see the film like the makers wanted it to be seen. This one factor is proof that the team has successfully given out a top-class product.

Some of the scenes are also informative and gives us an insight into the memorial tattoo, anniversary reaction and the life of a gamer. The tattoo has a major role to play from the hind sight and this has been given due importance even in the opening credits of the movie. Kudos to director Ashwin Saravanan for this genre specific, audio as well as visually breathtaking film Game Over. The psycho killers wearing the masks are scary and that is how it is supposed to be. It is like an actual game with its characters come to life and the art work adds up as a major positive in this aspect.

The technicians deserve a special mention. Cinematography by A Vasanth is world class as the majority of the film is shot in low light within the premises of a house. Edit by Richard Kevin fabulously works out wonders too. But the best part of the film is the music and sound. Ron Ethna Yohann has mesmerised the audience with his score and Sync Cinema who have worked on the sound design deserve an applause. For a film that heavily banks on sound, Game Over is right up there.

On the whole, Game Over is a not to miss, genre specific thriller based on the life of a gamer who is in search of a new life due to an unfortunate event that took place in her past. Producer Sashikanth and director Ashwin Saravanan have woven out a technically brilliant film with good performances and most importantly, an audio that holds the soul of this beautiful yet mind boggling film. No commercial elements, nobody has been taken for granted and just the content with magical making will enthrall one and all!

Verdict: A film that has utilised every craft to perfection! Game Over is one of the best thrillers you could witness in a cinema hall.