The Curse Of A Weeping Woman Review - The Curse that does not really scare you! 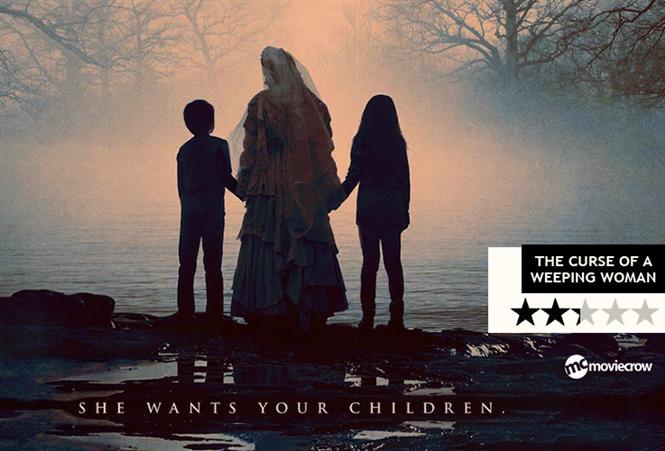 Most of the successful and celebrated horror films that we have ever seen, would generally have a very strong conflict that serves as a reason for revenge or really spooky and entertaining moments to keep us hooked to the screen. If we have both these factors, it is a clean sweep but even one of them executed well would give us a decent, watchable horror film. The Curse Of The Weeping Woman seems to be that film caught in-between these 2 ends and struggling to choose a side.

Directed by Michael Chaves and produced by James Wan, the storyline is as simple as a woman’s spirit trying to kill two children whose mother (Linda Cardellini), tries to save them from it. Linda plays Anna the cop who is also a single mother and struggles to find safety for her two children. Why this spirit attempts to kill these kids and how the mother tries to stop it forms the rest of the story. Even though the one line seems to have so much potential, we must say a very weak flashback does not let us sympathise or empathise with any of the characters right from the start.

The main cast has put out a decent show and Linda looks comfortable as the cop as well as the mother. The two kids have done a decent job to and there seems to be no major issues with respect to casting. The only factor that lets their performances down is the lack of involvement that one might have in watching them achieve their tasks in the film simply due to an uninteresting screenplay.

There is one mention worthy scene in a car where the kids try to escape from the ghost and we feel that more such scenes would have kept us more engrossed and very much in the film. Another scene towards the climax picks up pace and the attic sequence is quite well shot. But apart from 3-4 moments, there aren’t real scares throughout and this makes it very predictable right from the start.

As for the technical team, a lot of single shots used by the cinematographer Michael Burgess in low light is definitely appreciable. So is the edit of the film and the entire run time is only around 95 minutes. Peter Gvozdas does his job with the cuts. Sounds though apt, could have been better considering modern day era’s horror effects that genuinely scare us. A lack of a powerful ghost is a big let down and we do not really fear any of the actions or attacks that the ghost performs. It simply doesn’t seem all that mighty and doesn’t seem to utilise every opportunity that it has to get us screaming in fear.

For a large part of the film is inside a house, credits must be given to the team to have worked on the various departments of film crafts to give us a realistic experience. But what goes for a toss is the horror element and there is not much thrill as much as there is realism. Music by Joseph Bishara is interesting here and there but does not save the film at the end of the day.

On the whole, The Curse Of A Weeping Woman aka The Curse Of La Llorona, set in 1973 Mexico, has a lot of potential on paper when you consider the one-line. Though one might feel the conflict could still have been a tad bit better, with the utilisation of horror elements and an interesting screenplay, the film definitely could have been an above par attempt. But the execution of the screenplay and horror departments falling short of what is required lets it down making it a very ordinary attempt. For those who love and crave for horror films, this might not be the one film of the year to watch out for, but for those who do not watch the genre regularly, it could give you a chill down your spine here and there but nothing more.

A very sub-ordinary Mexico based horror flick that could have been way saucier.