Oru Yamandan Premakadha is an upcoming Dulquer Salmaan starrer which is scheduled for a release on April 25, 2019. Over the weekend, the film has its first video song release titled Muttathekombile composed by Nadirsha and Dulquer can be seen matching steps to the peppy number.

Actors-writers Bibin George and Vishnu Unnikrishnan have scripted this film and the duo will also be seen starring in the movie. Anto Joseph has bankrolled this project under his banner which is directed by debutant B.C. Noufal.
Dulquer in a recent interview has described the movie as a strong love story with humour and he plays Lallu, the local village painter in it. The female cast of this film includes Samyuktha Menon (who plays Jesna) and Nikhila Vimal (as Tinku) among others. 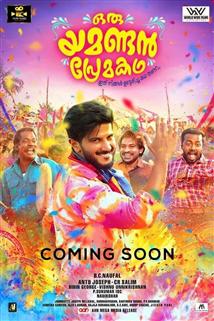