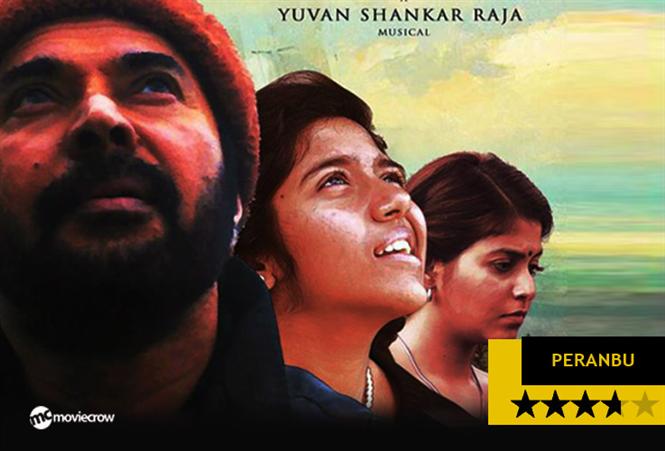 You sensed anger in Ram's first three films. Anger against the inequality that was accepted as a norm in society. In that way Peranbu is a drastically different film. It is about how the ray of love manages to creep through the smallest of crevices amidst daunting obstacles. In continuation from the film's promos we are straightaway into the world of Amudhavan and Paapa. They are at a place where nature is in its natural state, far away from human interference. As we get to see Amudhavan's daily struggles to keep Paapa happy we also learn what made them come this far away from the human race. At this point of the film there is this constant fear if the film could destroy your belief in humanity and convince you that if running away from the mad race of the civilized world is the only option left. But in what is probably Ram's most balanced work yet, he isn't interested in directing his anger towards the dark side. All that he is trying to do is keep looking for love. The all conquering, uninhibited and unconditional love.

The film is divided into chapters, with each chapter being named after what Ram believes to be the dimensions of nature. As much as the film might be about Paapa, it really is about Amudhavan. The very first time we see him, the weariness is written all over his face. He has possibly been through a lot and with Mamooty on screen, all this is established without him even having to utter a word. Calling his performance subtle would be an understatement and even gross injustice. Not even a second there seems to be any effort to establish his acting prowess. This is someone who is probably relishing the opportunity to lead a life through a given character, completely unmindful of the fact that he is emoting for a camera. Thinking of the physical strain that Sadhana might have had to undergo for Peranbu is mind boggling. Her performance too is completely devoid of any attempt to impress.
Yuvan Shankar Raja and Theni Eshwar bring in their 'A' game. They along with Ram ensure that for all the heartbreaking situations that the film puts us through, there is always a slightly cheerful tone to the proceedings. It is fascinating to point out that the film never has you depressed nor is there any significant melodrama. And what a pleasant surprise it is to see the film treat the subject of sexual urges of the differently-abled as a 'matter of fact' topic and not something that has to be shoehorned. The scene where Dhanapal (Samuthirakani) communicates about what Paapa is going through to Amudhavan is sheer brilliance. There is no underscoring being done here to establish the importance of the scene. Samuthirakini reiterates on what a fine actor he is. As Dhanapal you hardly sense any sympathy by him for Amudhavan. He has possibly seen all of it before and his only concern is in helping Amudhavan deal with the situation practically.
At times I did keep wondering if it is possible for someone to be as forgiving as Amudhavan. The answer probably lies in his formative years that is not shown to us. We do learn that he did spend 10 years abroad and possibly was not the best of husbands. I could not rule out the possibility of imagining that the protagonists of Ram's previous films might metamorph into someone like Amudhavan once their anger dies down and they understand that only love is the all conquering emotion.
I hardly felt any misstep in Peranbu apart for a brief while that involves Viji (Anjali). But even that makes sense once the character sort of gets a closure. Also Aamudhavan and Meera  (Anjali Ameer) meeting a little frequently by coincidence at crucial junctures towards the climax seemed a little too convenient.
Bottomline
I am not sure if this was Ram's intention. But there is every possibility that his Peranbu could make you a better person and look at life a little differently. It establishes the supremacy of love without romanticizing it. Because love in its purest form cannot be romanticized. You can add no value to infinity and Peranbu is about this infinite emotion called LOVE!
Verdict: 3.75/5 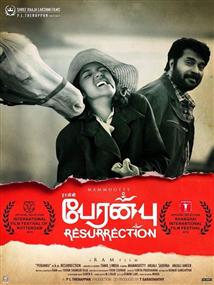