Sagaa Review - A watchable tale on friendship, love and revenge! 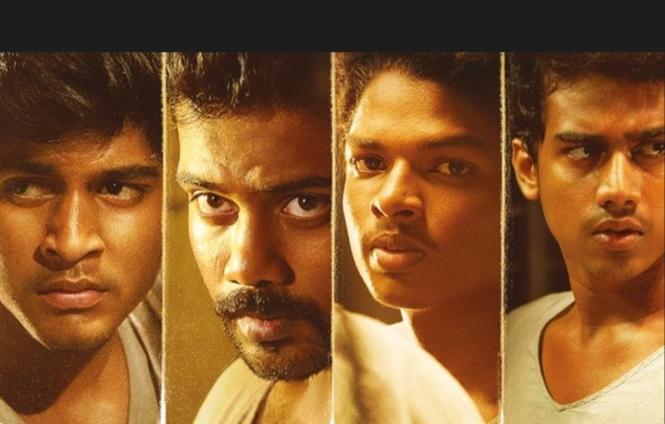 Sagaa Review - A watchable tale on friendship, love and revenge!

When you have simple components such as human emotions related to friendship, love and revenge as your playing cards in a Tamil film, it is fairly difficult yet typical to write out a complete feature film. On those lines, Sagaa, a tale that has a mix of all these components, directed by Murugesh talks about the lives of 5 boys stranded in a jail and the events that happen amidst them.

The one line of Sagaa is pretty simple but the plot has a lot of turns and twists, some of which have worked and some of which have been left as a predictable guess to its audiences. Right from the word go, the director wastes no time in introducing his main characters played by these young boys and this creates an interest in the mind of the watcher.

The first half deals with their issues in the jail and traces back the reasons due to which these boys landed in jail. Sathya, the lead character played by Saran and his best friend have to deal with Ganga and his boys who serve as a threat in jail. And then enters Jacky (Sree Raam from Pasanga), the mystery kid who keeps us guessing and the drama that unfolds between these kids is very interesting. There is also Kishore and Pandi from Pasanga who have important roles to play and the friendship factor is easily the biggest positive of this flick. This has been well supported by good performances, strong dialogues in majority scenes of the first half and a gripping ride till the interval block.

However, a creator’s biggest challenge is to keep us hooked throughout the movie and Sagaa, in its second half has a slip down from its engaging and gripping first half. The first half ends with Jacky’s character trumped for some reason and one would expect that the second half starts off with this interesting conflict that has left most of us bewildered at the end of the first half. And then enters the commercial element romance, to this film. Just as we wait to find out why Jackie was trumped, we are introduced to a couple of female characters, romance, a couple of songs and the overall pace and nature of the film gets hampered.

Also, most of the scenes that take course within the jail portion are quite interesting and once the director is left to deal with multiple plot points and characters in his second half and all of them at different locations at the same time, it is quite easy to say that he does not show the same level of maturity he did with his jail portions. The film in its latter half, apart from being partially butchered by the commercial elements such as love and songs, also loses way due to this hyper-link connection that demands for a more solid association. The female characters could have been framed better and they do not seem to have much to do with respect to the core of the flick.

As for the technical department, music by Shabir is decent and the song Yaayum was a big hit but was a clear misplacement in the film. His BGM’s seem apt in majority scenes but a few of the tunes also remind us of a few familiar tracks. Cinematography in the jail portions by Niran Chander are very good and edit by Hariharan is commendable in select scenes.

On the whole, Sagaa has some genuinely good performances, especially from the young lads who seem to show a lot of maturity. The impact that the first half had only makes us wonder why we could not watch more such scenes and get surprised by this package of friendship, revenge and love titled ‘Sagaa’. The base of the film is friendship and the director has definitely proven his mettle in all the scenes that deal with this emotion. Even the revenge factor is convincing enough but what brings the overall film down a little is the romance tracks and their connectivity. Sans these elements, Sagaa would have been a very engrossing first film by Murugesh. But still, it comes out as a watchable entertainer for the majority audiences.

A fairly interesting tale that is high on friendship and emotions, but could have had less compromise in its latter half.