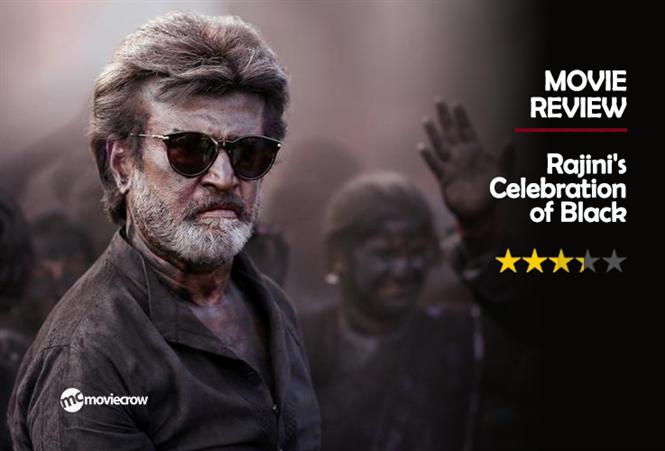 Kaala is the biggest release so far this year. Pa. Ranjith and Rajini are coming together back-to-back after Kabali. To summarize, Kaala is a celebration of black. Who can be more apt than Rajini, our king of black.

It is a relief for some of the fans who likes to see Rajini playing his age. Rajini’s acting, action scenes and pure unadulterated romance and chemistry with two of the leading ladies showcase his arguably under utilized acting skills. It is a revelation to see how Rajini can be at his casual best in a realistic movie. He gels well with rest of the cast and no qualms in exposing his vulnerabilities. Rajini keeps you spell-bound with his magnetic screen presence.

Director gives enough space to supporting cast members who have all acted exceedingly well. It is good to see the director has given the required attention and screen time for all supporting characters – Eswari Rao, Huma Qureshi, Samuthirakani, Dileep, Aruldoss and Anjali Patil. The biggest find is the multi-talented Manikandan who scores big time in critical scenes with Rajini.

Nana Patekar is brilliant as a strong villain for Rajini. The build-up to his proper reveal was almost halfway into the movie. The director does most of the villain character development through the omnipresent posters all over the city. The villain theme and slow motion visualization elevates him as a powerful villain to match up to Rajini. A lot of credit to Santhosh Narayanan for his extra attention in background tracks for Nana’s portion. Nana Patekar has tried his best to mouth his own dialogue in Tamil. But, his body language and sheer presence brings out his evilness in full force.

Pa Ranjith usually does an excellent characteristization in terms of casting and location, as witnessed in his first two movies. He lost touch with this core strength in Kabali. This time, the director has shifted the base to Dharavi, home of Velu Nayakar, and he is back to his form. Any semblance to “Nayagan” is probably intentional and conceived as director’s own creative take on best of gangster classic movies. Pa Ranjith has taken a lot of care in coming up with dialogues weaved well with the flow.

Pa Ranjith retains his technical team for the most part in this movie as well. Santhosh Narayanan songs are off-beat and requires guts to do such unconventional scores for a big budget movie. Camera work is fluid shifting from darker side to white palette and in the climax symbolically exposing the full spectrum of colors. The songs are situational and luckily doesn’t affect the flow much. Editing is paced well and may receive complaints of being lengthy. The movie’s violence quotient is on higher side.

Ranjith sets out to break all stereotypes from the get go as Rajini gets cleaned bowled while playing Crickets with kids in the introduction scene. A few examples of breaking stereotypes include showing Ravanan is actually the good guy and the brilliant parallels that the director makes to show that perspective. The director fundamentally questions the mistaken notion of why white is considered to be pure and good while black considered to be bad and dirty. This serves as the basis for racial discrimination in the first place. And many more such stereotypes not to be revealed to avoid getting into spoilers.

Pa Ranjith has always made it a point to talk about societal imbalance through lyrics, subtle product placements and references throughout. In Kaala, he goes one step higher by taking a strong stance against Singara Chennai and Swacch Bharath and boldly portrays them as land grabbing schemes. The downside is that director pushes his agenda and comes across as anti-establishment propaganda .

If you view the movie from a political angle, Rajini’s contradiction are evident throughout the movie and almost to the point of distraction. For example, in the movie, there is a song glorifying and encouraging strikes and grass-root protests (“porattam”). In real life, he went on record to quote a contrary position. No doubt, Rajinikanth has walked the tight rope with his political ambitions. The movie will get some resistance from people who may identify along certain political lines.

If you were to term Kabali as Rajni's movie directed by Pa. Ranjith. Kaala is Pa Ranjith's movie in which Rajini has acted. Go to watch for Rajini the actor and not the Superstar