The title Iravukku Aayiram Kangal (IAK) clearly suggests or at least gives an inkling of what the premise of the film is going to be. And the film directed by debutant Mu. Maran, justifies the title as falling under the category of an investigative thriller.

An interesting aspect of the film is the name of its main characters. They are Bharath, Suseela, Ganesh, Vasanth, Roobala and Anitha. For all those who are acquainted with the crime and detection novels in Tamil, these names would be familiar. And to add to that, Maran has played his tribute of sorts in having the character of Lakshmy Ramakrishnan as a writer who specializes in this genre.

That said, IAK is about the journey of the protagonist Arulnithi on his way to shield his love interest. In this travel, he encounters incidents and characters which shape up the film.

The story of IAK is complex with multiple characters and therefore it is not a film where you can sit relaxed in your seat texting. You need to clearly focus to get a grip of the proceedings on screen. It is an intelligently written story and kudos to the director for having taken up a subject that demands a lot of research and eye for fine details, in his debut directorial.

However, these very factors act as an antithesis because there are many characters in the film which could sometimes confuse an average viewer, which in turn may result in them digressing from the screen. There are also to and fro shots to explain the happenings which might increase the restlessness. These could have been reduced.

The first half has the problems laid out in tangles, which has the attention of the audience. The second half which should have been tighter as it should solve the crime, lacks the desired pace. However, for a debutant, Maran has done a decent job and needs to be lauded. There are some interesting twists and turns but one might also feel that there are too many and are force fitted.

Arulnithi fits his role correctly and Mahima Nambiar as his love interest is natural. The supporting cast of Ajmal, Anand Raj, John Vijay, Aadukalam Naren, Chaya Singh, Vidya Pradeep, Suja Varunee and others has done their parts with understanding.

Camera work of Aravinnd Singh is good and worked in sync with the build-up of the story. Sam CS’s background score is just about average. For a subject such as this, music should have aided better.

Bottomline: To sum it, Iravukku Aayiram Kangal is a fairly well directed and enacted film that you would not regret going to.

Post your Rating and Review for Iravukku Aayiram Kangal here 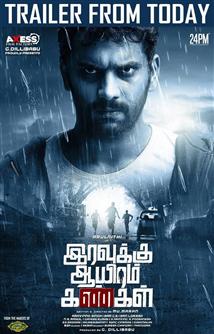