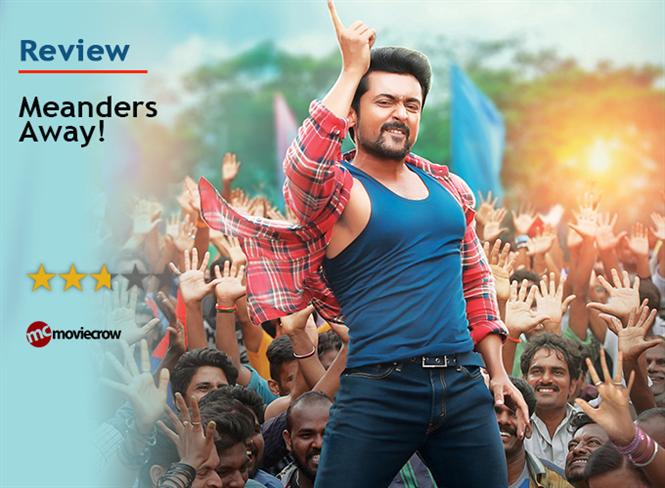 Thaana Serndha Kootam (TSK) is an adaptation of Akshay Kumar starrer Special 26. The reason Special 26 worked well is because the screenplay was laser-focused right from beginning to end and never deviated from its core message. Special 26 didn’t take up the burden of lengthy justification of why each character did what they did.

Unfortunately, the weight of Suriya’s stardom and good samaritan image appear to be weighing in on Vignesh ShivN’s shoulders. Vignesh ShivN and Suriya have met half way. Instead of getting the best of both their strengths, what we get is a compromise of a pristine screenplay.

When Kamal Haasan remade Papanasam (and numerous others) and Shankar signed Vijay to do Nanban, they were strictly adhering to the original script and did not succumb to the temptation of establishing their personal style. This kind of restraint comes from the respect for the creators of the original. But, once the decision is made to breach the sanctity of a classic screenplay, it is a slippery slope from there on. That is unfortunately what happens in TSK with a lot of incredulous scenes and lack of attention for logic.

TSK (and Special 26) is based on Opera House heist that happened in 1987. This gives the opportunity to make it as a retro classic. Hence, the story picks up on the 80s unemployment, references to movie releases such as Nayagan albeit being a bit anachronistic, and 80s product brands mentioned in songs among other things. It also conveniently gives an opportunity to take a shot at current political situation, corruption and adopt a strong anti-establishment tone evident in multiple scenes (borrowed heavily from Mersal's abortion becoming a trend in future type dialogues).

Suriya is very spontaneous and it is a welcome change to see the hero loosen up and a bit free flowing in his body language and dialogue delivery. It is appreciable to see Suriya allowing the villain to take a dig at his height. Suriya gives 100% to the movie and shows he is flexible and always willing to be a director’s actor. Suriya - Keerthy Suresh's chemistry and comic timing work quite well. The love scenes laced with comedy provides the lighter moments.

RJ Balaji shows tremendous maturity in his body language and is  excellent in lacing his comic one-liners with a tinge of emotion. Ramya Krishnan is effortless in playing the role of acting like a CBI officer. Senthil reminisces some of his best comedy scenes from past such as squashing the petromax bulb and banana scene. There is a lot of time to buildup for Karthik’s role as an honest strict officer. It totally fizzles out in the end, similar to Senthil’s petromax bulb. Suresh Menon with Gautham Menon’s casual yet well-modulated voice is effective.

Yogi Babu appears as a brahmin ambi in just one scene is hilarious. Anandraj seems to have found a sweet spot under Vignesh Sivn direction. There are many more accomplished actors such as Thambi Ramaiah, Nandha, Kalaiarasan, Sathyan, Brahmanandam and blink and you'll miss it role of yesteryear hero Sudhakar. The list goes on and on. They all do their limited portions well. But, the sum of its parts don't add up.  Wish we got to see few characters and more screen space for some of these accomplished actors.

Anirudh's songs in TSK are not runaway chart-busters unlike his previous hit album in collaboration with Vignesh ShivN. The songs break out too often on screen. The background score  works very hard sometimes and serve as a distraction. The movie has been a shot in mostly controlled environment within sets. There are a number of fast editing cuts with what appears to be a bit redundant. The editing could have been a bit more efficient. The commitment to sticking to retro style is half-hearted and evident in set design, background properties, costumes, art direction, such as the re-creation of a busy mount road and LIC in 1987.

Whenever TSK is loyal to the storyline and scenes, it works well and the movies cruises along fine. The screenplay starts wobbling whenever Vignesh ShivN takes the liberty to add forced back-stories in order to justify hero’s actions, commercial songs, fight sequences, Robin Hood acts catering to Suriya’s mass aspirations. All these elements end up being a huge distraction and result in a meandering journey.