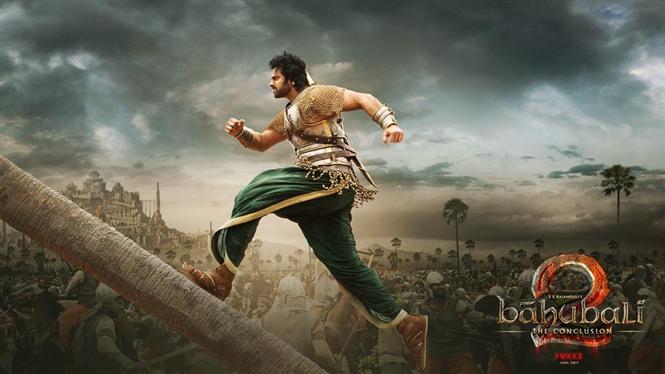 The real challenge for the makers is that the second and concluding part will have to be even more amazing than its remarkable predecessor. SS Rajamouli delivers yet again when the tremendous expectations weigh heavily on his shoulder. The question is how could you impress your audience who have already gone gaga over everything in the first part. Director Rajamouli appears to have taken up this challenge quite effortlessly by stretching his imagination to weave the magic bigger without the success of the first part affecting him.

Fans may claim the reason for watching the concluding part is to know “why Kattappa killed Baahubali?”. It is also Baahubali’s exceptional CG work, rich productions, world-class technical value and elaborately mounted action sequences that make the audience pay the premium price for first day shows. In reality, you almost take all these goodness for granted as soon as the film operates just as powerfully on a human scale. What really keeps the audience glued for rest of the screen-time are the characters and human elements. The script may be faulted for being a bit too simplistic and somewhat predictable at times. The story and screenplay may not be striving to be innovative or path-breaking. Still, Baahubali stands tall due to the beautifully crafted scenes and interesting narration.

Prabhas lives the character of two generations of Baahubalis. Nobody will complain about the fact he hardly shows any difference in looks nor acting. Arguably, what Prabhas may lack in acting, he over-compensates with his built, style and body language. Rana Dagubatti is a perfect match as a villain. He downplays for most parts while looking very menacing. Sathyaraj and Anushka get meatier roles this time and they make the best use of it. Much of the drama and wide range of emotions unfold through Sathyaraj’s “Kattappa” character. It is difficult to takes eyes off of Anushka with her beautiful looks and the way she performs her action. The action choreography of Prabhas and Anushka firing multiple arrows is poetic and absolute delight. Ramya Krishnan as Sivagami is fantastic in displaying her strong ego as she falls prey to evil schemes. Nasser has done his usual best of conniving uncle. Tamannah is the only leading star cast who has much smaller role compared to the first part due to the way story unfolds.

The computer graphics does not come across as gimmick because all the digital creations have been well integrated into the story. It is difficult to spot where the production design/art direction of Sabu Cyril ends and where the animation begins. Not only is Senthil Kumar’s cinematography is magnificent in the way it blends reality and graphics, it is equally exceptional in the way the shots supports the story. Keeravani’s songs and background score are strong support for the movie. The action department deserves big credit for keeping it interesting. Most of the stunt crew members have past experience working in Hollywood movies. The quality of action choreography is the best in recent times.

Thankfully, Rajamouli is still human. We know that only because some of the minor imperfections in the movie. The movie has multiple ending-like action sequences in both parts. It is difficult to surpass the previous war action every single time. As a result, the climax action gets a bit monotonous and tad repetitive. Also, there is probably a bit more drama that is lacking after the conclusion of final war portion and good wins over evil.  The ending probably needs a satisfying closure after audience investing close to 6 hours, let alone the emotional investment.

Rajamouli has now set the benchmark higher for rest of the film-makers in India to look up. Salute to the visionary director. Must watch in big screen