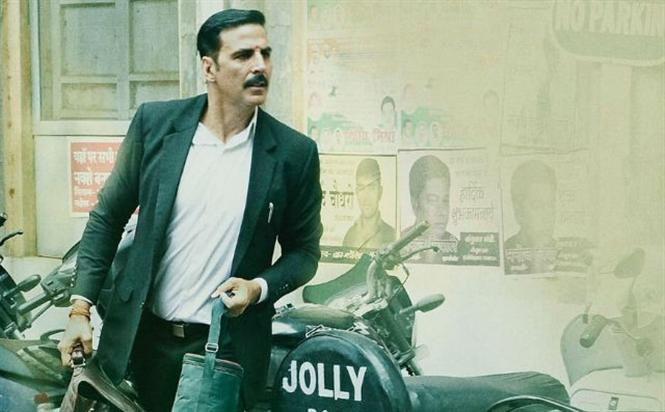 There’s a moment during the early portions of Subhash Kapoor’s Jolly LLB 2 where we see Jagdishwar Mishra aka Jolly (Akshay Kumar) come home after helping out at the party held at the house of his boss. Seeing his wife Pushpa Pandey (Huma Qureshi) upset with him, he tries to impress her by saying that he has brought her a bottle of whiskey from the party. In his attempt to pour a drink, he first fiddles with his ‘janeu’ (sacred thread) and is about to consume it, only to see Pushpa take the glass as well as bottle from his hands and consume a few quick drinks. The dialogues exchanged between the two during the moment are quite lively, humorous and very realistic. This is a wonderful example of the writing that has gone into the film. We also see Justice Sunderlal Tripathi (Saurabh Shukla) walk into his chamber in court while he sort of jives to the strains of “Gulaabo” (from Shandaar). Later we realize that he is trying to get ready for his daughter’s wedding where he intends to make her happy by performing to the song.

There are quite a few such moments which stay with you well after the film is over. Subhash Kapoor had certainly struck gold with Jolly LLB (2013), the film going on to be critically appreciated, commercially successful and even winning a couple of National Awards. Hence when the sequel was announced it was obviously something that made people take notice of. Considering that his previous film Guddu Rangeela (2015) had turned out to be a disappointment, Jolly LLB 2 seemed to be a good film for him to get back into form. The news of Akshay Kumar playing the lead in the film and replacing Arshad Warsi was a surprise, since that the original film was quite a success and Arshad’s performance had been well received as well. Despite being a commercial entertainer, Jolly LLB had its heart in the right place and it was a film made with the sensitivity and sensibilities of a good indie film.

While the entry of Akshay Kumar did make the sequel much bigger in terms of its commercial prospects, somewhere there was also a fear lurking among people as to whether any compromise of sorts has been done with Jolly LLB 2 to accommodate a huge star and if the film would manage to remain simple yet powerful as the original. What better way to evaluate and determine if the fear is true or baseless than by watching the movie itself. If Jolly LLB was based in New Delhi, here the action shifts to the courtrooms of Lucknow. Jolly (no connection to the Jolly in the previous film) is a lawyer in Lucknow, who is unhappy being the assistant to a leading lawyer and missing out on proper action himself. He aspires to get his own chamber and start his independent legal practice. In his attempt to see his dream fulfilled he ends up lying to Hina Siddiqui (Sayani Gupta) and takes money from her saying that his boss would fight her case.

When she finds out that he has betrayed her trust she goes on to commit suicide. Jolly is humiliated and even his father feels let down, making him realize that the only way to redeem himself and win back some respect is by taking upon the case that Hina was pursuing all this while. Jolly goes on to realize that the case has far reaching implications due to the people involved, even as he himself is pitted against a powerful lawyer Pramod Mathur (Annu Kapoor). How does Jolly go on to handle the proceedings from thereon and take the case to the logical end is what we get to see as the film progresses further. There is quite a bit that goes in favour of the film and it starts with the writing which as mentioned before gives the film just about the right balance of humour and strong drama. Also thankfully just because the protagonist is a huge star, there is nothing much done to pander to the fancy of the star as such. Jolly in this film too is a simple, slice of life character, played by Akshay Kumar the actor and not really Akshay Kumar the star.

Also thankfully the courtroom scenes are quite a delight to watch and the humour during the scenes is quite subtle and natural. Take for example the way Pramod Mathur decides to go on a dharna inside the courtroom and the way Justice Sunderlal Tripathi reacts in return by also doing a dharna. Yes one can wonder how Jolly is able to easily move in and out of Kashmir in no time, but that’s thankfully not so much of a deterrent when there’s so much otherwise to appreciate in the film. While the songs (composed by Manj Musik, Meet Bros and Chirantan Bhatt) as such are harmless, they do appear a little odd in a film like this. The film benefits from its wonderful casting choices, people like Vinod Nagpal, Brijendra Kala, Ram Gopal Bajaj, Sanjay Mishra, Manav Kaul, Inaamulhaq etc do their bit effectively. Sayani Gupta goes a little overboard in the emotional scenes but does leave an impact, while Rajiv Gupta (who plays Birbal, the assistant and friend of Jolly) and Kumud Mishra (essaying the bad cop Inspector Suryaveer Singh) play their characters quite well.

Huma Qureshi as Pushpa Pandey is very good and it’s nice to see the scenes where she interacts with Jolly. Take for example the one where Jolly is seen making rotis for Pushpa and she goes on to appreciate his cooking. She is also shown to be a strong willed woman who supports her husband completely. It’s a delight to see Annu Kapoor play the hard-nosed lawyer Pramod Mathur with panache. Saurabh Shukla who won the National Award for Best Supporting Actor with Jolly LLB is once again in super form here, reprising his character of Justice Sunderlal Tripathi in style. Akshay Kumar is lovely as he essays Jolly with a lot of charm and even underplays himself to a certain extent. This is easily one of Akshay’s best performances of late, something that he can feel proud of even many years later. Overall Jolly LLB 2 is a good film for the entire family, something that should keep you entertained in the right fashion.

With Jolly LLB 2 Subhash Kapoor has gone on to make a convincing follow up film to a well appreciated and successful film of the recent past. It’s also heartening to see that the presence of a huge star in the film hasn’t really diluted the impact and has only enhanced the franchise all the more. 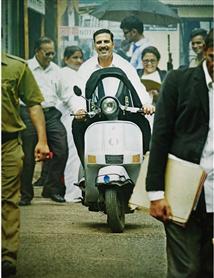