Sairam (Mohanlal) an assistant manager in a super market is seen shamelessly borrowing money from his own subordinate, a scene which conveys the fact that he has quite a few expenses to take care of. But it’s a scene that is conveyed without any emotional drama. This is an example of how Chandra Sekhar Yeleti’s latest film Manamantha (which also has a Malayalam version, Vismayam and a dubbed Tamil version, Namadhu) manages to bring in a balance in terms of conveying 4 different tales, all of them handled differently. Take for example another moment when we see two Gayathri (Gautami) and her friend/neighbor (Urvashi) making a visit to a kirana store that’s quite far away from their locality in the hope of making a great saving, only to end up actually spending more in the process. These are just examples of the way simple slice of life moments have been narrated by Yeleti in an interesting fashion.

The film talks of four different people, all of them from middle class backgrounds and what happens
in their lives. So Sairam is someone who is struggling to take care of his family and the mounting
expenses, when all of a sudden the possibility of a promotion at work gives him a ray of hope.
Gayathri is a typical middle class homemaker whose life revolves around her family. One fine day she
meets her college professor (Gollapudi Maruti Rao) who now wants to do something for her, being
indebted to her support in the past. Abhiram (Viswant) is a smart engineering student who has
ambitions to make it big, only to fall in love with a rich girl (Anisha Ambrose) and forgetting his
aspiration in the process. And then we have Mahita (Raina Rao) a school going girl with an extremely
helpful and caring nature, who goes on to get very friendly with a poor boy, so much so that she
decides to help him join school.

The movie chugs along in its own charming way, making sure that we slowly but surely become a
part of the 4 different stories. While the first half doesn’t really convey much, it’s more like a means
to establishing the four stories. But as the second half moves along the writing seems to improve
and Yeleti clearly seems to have delivered in the manner he goes about connecting the four different
parts together in a very interesting manner. And despite the film being focused upon the 4 main
characters, care has been taken to ensure that the supporting characters are also of relevance to the
plot. Harshavardhan as the competitor to Mohanlal for the post of the manager, Dhanraj who plays
the subordinate of Sairam and Ayyappa Sharma who plays the goon leave an impact with their
presence in the film. Of all the four tales the love track seems to stick out a bit as the weak link
despite an earnest performance from Viswant.

Raina Rao makes a wonderful debut with Manamantha and her eyes are very expressive. It’s a treat
to watch Gautami in a role that she carries off very well. Manamantha is a film that has been in the
news thanks to the presence of Mohanlal, this being his first lead role in a Telugu film. Any doubts
whatsoever on whether his presence in the film was really required or not would disappear once
you’ve watched the film. And it’s good to see him having dubbed for himself which makes it all the
more appealing overall. Mahesh Shankar’s songs are pleasant and go well with the mood of the film.

Over all Manamantha is a feel good film for the family and is certainly one of the better Telugu films of late. 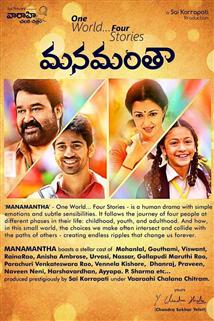