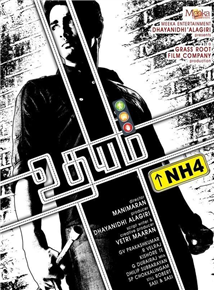 Though not a perfect ride, Udhayam works well as a road movie that is quite crisp and engaging.

The final product does not disappoint but at the same time this ride through NH4 has some speed breakers, most prominent being the dubbed feel of the film.(more)

Technical team has done their work well enough to lift the film up. G V Prakash's RR revs up the moods where needed and his much popular 'Yaaro Ivan' has also been picturized well. NH 4 exemplifies the editing prowess of T E Kishore. Velraj's cinematography lends itself the necessary feel and is surely a value addition to NH4.(more)

Udhayam NH4 is a road movie with humour, thrilling chases and stunts sequences.

The other highlight of the film is the director has not added unwanted scenes. Nonetheless, there is humour in the film. Not to forget, the thrilling car chase sequences and stunt scenes. (more)

The presentation is unique as it doesn't have the trappings of usual masala potboilers. It is a simple story of a boy and a girl on the run from her dad, a powerful state minister in Karnataka who takes the help of an encounter specialist to track them down.(more)

Udhayam NH-4 is a typical Vetri Maaran script that plays with a handful of complex characters.

Siddharth comes out with a neat performance, playing a mature and smart Prabhu. Ashrita Shetty looks promising playing Rithika, but could do with some improvement in the dubbing department. Kay Kay Menon does well in the good cop-bad cop drill. The movie is an engaging watch thanks to the clean editing by Kishore T E.(more)

The soft melody, Yaaro Ivan by the soon-to-be-wed couple G V Prakash & Saindhavi and Maalai Pon Maalai by Bela Shende and SPB Charan are both immensely enjoyable and are rocking the charts. Ora Kannala, which has been written and sung by Gana Bala is a typical Tamil Gana song and does not fall far behind. (more)

The story is slight, but the treatment makes all the difference.

Thank you for humour that's grafted organically onto the happenings, like a hilarious lip-lock. And most of all, thank you for not setting the leads on an Alpine landscape during a song stretch.(more)