The director painstakingly explains every scientific detail, which sometimes back-fire. Anand Shankar should be credited for staying loyal to the script without deviating too much away from the story, barring the 3 songs which are considered mandatory to meet commercial requirements.(more)

Vikram in full form, technically strong too. But script and logic could have been handled better

In an investigative action thriller such as this, scenes must proceed at a rapid pace. But there are moments when we leave the happenings on screen and wander around. The team should have focused more on the story and screenplay, which could have resulted in a better product. The intended twists are well guessable by the current audience. There are a few logical questions which look unanswered in the story. To sum it all, Iru Mugan has its pluses in the form of technical prowess and performances but the core story and the treatment let it down.(more)

Iru Mugan is a fast-paced action thriller that will satisfy fans of popcorn movies and those seeking entertainment alike. It's a great weekend watch.Go for it! (more)

One Dimensional. Watch it for the lead pair Vikram and Nayanthara, stylish making and some neat action sequences.

Anand Shankar, who gave the neatly packaged 'Arima Nambi' has attempted a sci-fi with chemical warfare as the core subject and promises a lot with his set up in the first half only to disappoint with a dragging and illogical second half which pulls down the whole affair to a mediocre level.(more)

This racy entertainer is an out and out Vikram show.

Iru Mugan is an out and out Vikram show. He plays the mean machine Akilan and the cunning, rogue scientist Love simultaneously with ease. Anand Shankar has written his script to suit Vikram's image of an actor who does macho action films and experiments with the characters as well. And Vikram convincingly pulls it off with clean.(more)

Iru Mugan is a let down

The narrative lacks intensity and pace and unfolds rather blandly. (more)

Vikram shines as Love, but not the film

Anand Shankar's scale and attempts at research have to be appreciated, but film's flaws make it yet another dumb action film.(more)

science of the times

Anand Shankar shoots multiple set-ups and chops the footage into quick, disorienting cuts that slash through the tedium of the typical Tamil-film action scene. But the stunts get repetitive after a point. Inhale drug. Become superhuman. Hurl opponent at wall. Rinse. Repeat.(more) 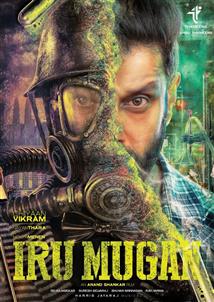