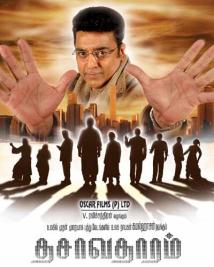 The big plus for watching the movie is the one-man acting school, Kamal Hassan. He pitches in yet another fantastic performance. Cinematographer Ravi Varman may take a bow, as his camerawork is glossy and superb. Himesh Reshammiya's music is nothing much to talk about. But Devi Sri Prasad’s background score is superb and makes up for everything. Yes, the film is hugely flawed, but it is still worth a look for its overall packaging and richness in production value. (more)

The film is certain to thrill and entertain the audience for all of its 165 minutes, making them feel that they are watching something unusual and spectacular on screen. The film is a scientific thriller par excellence and it is certain that Kamal has excelled in his eleventh role of the story and script writer. K S Ravi Kumar should also be complimented for his handling of such a complicated but challenging subject. He has taken the best out of his artists and technicians. (more)

One striking feature that hits you in the face once you have watched ‘Dasavatharam’ is Kamal Hassan's passion for film making. When it comes to action and stunt scenes, ‘Dasavatharam’ is head and shoulders above most Indian films. Cinematography has been simply awesome. The direction (K.S.Ravikumar) has been apt sticking to the script in the true sense of the term. At the end of the film one tends to ask….has Kamal Haasan been so spectacular that he has overshadowed the script and story this time? (more)

In short, with unexpected twists and turns missing in the film, Dasavatharam is a make-up magic show that disappoints as drama and satisfies as a technical showpiece. Dialogue writing in the movie needs to be singled out. Asin has done her job as best as she could. Cinematographer Ravi Varman has worked in sync with the story line and his camera movements are commendable, while Devi Sri Prasad has done a good job with re-recording.(more)