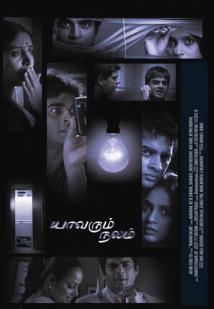 Yaavarum Nalam is an enthralling edge-of-the seat taut horror thriller that keeps the mercury rising throughout the 2 hours 15 minutes. The film works because of director Vikram Kumar's plot and tight narration. Madhavan carries the entire film on his shoulder and he delivers a measured and meticulous performance. (more)

Very rarely do you get to see a movie that's not just logical and has good performances, but comes with a deliciously intriguing thriller whodunit tag as well. And that's exactly what you get in Yaavarum Nalam. It's the story that's king here and even the players themselves fall into the secondary category. Madhavan is his usual suave best. If the director is the king, then cinematographer P C Sreeram is undoubtedly the prince of the proceedings. (more)

All credit to director Vikram Kumar, who has come out with an engrossing thriller. An engrossing screenplay with no lagging moments bringing the audience to their seat-edges sums up 'Yaavarum Nalam'. P C Sreeram's cinematography adds pep to the screenplay. (more)

Prepare to be scared!

The movie is a sleek and out of the box thriller that keeps you in the edge of your seat. A tightly knitted screenplay that is woven around a not-so-illogical-storyline with amazingly convincing performances makes the movie one of the few watchable ones in its genre in the recent times. A simple plot, good enough for a horror story, laced with some necessary elements to befit the present day scenario sets the movie’s pace. (more)

Vikram K Kumar has tried something different with Yavarum Nalam. The premise may see too childish to some, but the treatment of the subject is extremely interesting and I must say scary too! Madhavan has done a fine job. The rest of the cast provides good support to the story. Cinematography by P.C Sreeram is amazing. Talking about the story and screenplay, I must applaud Vikram K Kumar for trying something different. (more)

If the film works, it is because the director seems to know exactly what the modern audience is tired of watching. P.C. Sreeram’s cinematography sets the mood. And, there’s the leading man R. Madhavan who’s always in control of the film. With so many pluses, it’s a pity this film isn’t any shorter. But as they say, all’s well that ends well and ‘Yaavarum Nalam’ ends well. (more)

Madhavan carries the film on his shoulders neatly with a neat performance. P C Sreeram's natural lighting is a major plus. Of course, there are a few iffy points. It is a neat entertainer without amateurish spook props. This is one goose bumps date you would want to keep.(more)