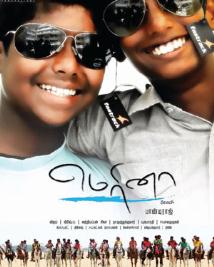 Pandiraj’s dialogues come to his aid hugely and they are the major highlight of the film. Credible characterization is a positive element in Marina and all the artists fit in perfectly with their respective roles. The film maker could have worked more to avoid the documentary feel the film gives for the most part. It is due to this very reason the film struggles to sustain the interest of the audience completely.(more)

Each character in the film has a purpose and takes the story forward. The film is lively and a good screenplay makes it interesting. Overall the movie is worth a watch and brings back the entertainment of the Pasanga movie team.(more)

Pandiraj's vision and message is loud and clear. The movie seems to have achieved the goal. A movie like 'Marina' that is unconventional from the word go deserves appreciation. Though at places it sounds more a docu-drama, 'Marina' makes a pleasant watch. In a nutshell, 'Marina' is perhaps India's answer to Oscar-winner 'Slumdog Millionaire'. (more)

A Touching Film with realistic approach. Hats off to Pandiraj…

Marina is feel-good movie with more elements of entertainment and message. The film will surely bring more honors for Pandiraj and the film deserves it.(more)

An emotional entertainer which will in fact make you think!

Director Pandiaraj has neatly captured the local flavour of Chennai through cinematographer Vijay's lens. Though the film does not have a strong story line, the casting is perfect. The film has its own ups and downs and there is no doubt that Marina is one of the finest films which has portrayed Chennai in a good lime light.(more)

Marina is worth a watch

Pandiraj's movie, although it slips and slides at places, is largely a faithful documentation of one of our country's liveliest beaches, as it showcases lives far removed from ours in a poignant fashion. Definitely worth a watch. (more)

Marina is a failed attempt at making a companion piece to Pasanga.

I'd rather watch a straight up commercial like Vettai than watch a film which particularly aims at being noticed as original. And you just wait for it to collapse, which it eventually does.(more)