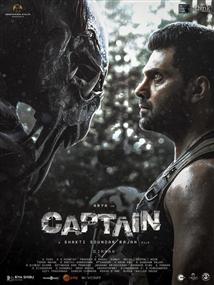 Neither Captivating Nor Commercially Viable!

Should have been at least a passable action thriller if the screen-writing and direction was interesting and matured respectively. Also, the terrible graphics is a huge let down.(more)

Even the creature - the one reason to checkout the film - is underwhelming. It looks like a cheap knock-off of the Predator in appearance, and does things that an unintelligent villain does, including not killing it's biggest threat - the hero - when it has the chance. The same can be said of the film, too - an underwhelming, underwritten action movie(more)

Captain sees Vetri and Keerthi get a breakthrough in finding the Minotaur�s head. While you expect the same creature, the director surprises you by showing a giant Octopus. Ummm, aren�t they different creatures? Captain is an underwritten film which needed much more substance and attention to detail to capture the audience.(more)

The emotional beats don�t work and even the major action sequences involving these creatures don�t leave an impact because of how artificial they look. The final result is a mostly funny creature feature that is most enjoyable when you�re laughing at its ridiculousness.(more)

Arya's low-budget monster film bites more than it can chew

There�s a huge fanbase for Asian creature films, but Captain doesn�t provide the thrill or invoke the disgust of such B-films. The visual effects were shockingly shoddy to make us fear the creatures. Also, they don�t go for the kill instantly, which removes a sense of immediate threat. Yet, one can see some thought has gone into creating the monsters and their biology. Shakti has ideas, but they don�t come through effectively in this low-budget monster film that bites more than it can chew.(more)

All the characters are underwritten. Aishwarya Lekshmi is wasted in a cameo. Even Simran, who plays a slightly bigger role, does little to keep us invested in the film. Just because the story is set in an army backdrop, the director attempts to throw in some token patriotic line in a scene that feels entirely unnecessary.(more)

If you pay attention to the details, you can guess them both because you�ll have all the clues in your hand. What I don�t get is how Keerthi couldn�t see that. Shouldn�t scientists be sharp? She also fails on another account. She doesn�t know how a creature dies � or the method that can be used to kill it. Vetri is the guy who puts it all together at the end of the day. He must surely be obtaining a lot of information from the war books that he keeps reading.(more)

The story is a mix of the usual creature-features, like Alien or Predator� but without the scares, the tightly held atmosphere, the A-level visual effects. The aliens look like a man in a rubber suit while standing and while crouching, they resemble rabid dogs. And the mother alien appears to be another animal altogether, which made me laugh. I mean, remember the mother-creature in Aliens, when the Sigourney Weaver character enters her lair? Forget laughing, I don't think I breathed. Why not just follow those established templates, instead of saying "I am Tamil-ising this premise with a love song and a sort-of heroine played by Aishwarya Lekshmi"? Plus, this love song makes little sense when we learn something new about this woman at the end. So even by Tamil cinema rules, you are not doing it right. (more)

What works best in 'Captain' is the montage that depicts the art of war's five rules that promises something great but flatters to deceive. The core idea of a captain going against all odds to clear the name of his teammate keeps the interest for sometime in the first half. The sets of the alien lab and the military base give the ambience. The spider creature and the idea of it being a signal transmitter grabs attention.(more)