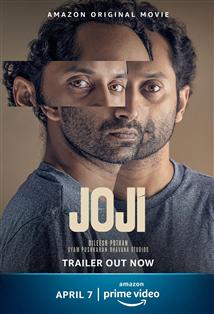 A Straightforward But Haunting Drama With Terrific Performances!

Much like Dileesh Pothan's earlier two films, Joji is built on a simple premise but this one is a much darker film. There is a chilling tension right through. This is such a simple as well as a complex film. Simple as in, the plot is straightforward with just a handful of characters. But no one is a simple character. Each one of them seems to have a troubled past and though they seem to be normal on the surface, you fear that they could explode at any point. And what a masterstroke to have the film set in our times ( the covid period ). The physical mask keeps reiterating the hidden face of the characters.(more)

Joji is the kind of movie that shakes you up and refuses to leave you long after the end titles start rolling. It is affecting and makes you feel how easy it is for a human to give in to greed and then, face the consequences. This one is a MUST WATCH! (more)

The sinewy structure bestows on Dileesh Pothan's Malayalam film a degree of finesse that enhances its exploration of the banality of greed and self-serving violence.(more)

Joji is as much a perceptive study of the slow unravelling of a criminal mind, as it is an indictment of the society and the family structure that is the origin point of that criminality. Dileesh Pothan has scored a hat-trick, with three films that are unlike each other. (more)

The slow burn of tension and dread is skillfully built up in the ace writing of Syam Pushkaran, whose last outing was the wonderful Kumbalangi Nights. Pushkaran, director Dileesh Pothan (Maheshinte Pratikaaram, Thondimuthalam Driksakshiym) and Fahad Faasil are long-time collaborators, and the smoothness in their latest coming together is proof, if it were ever needed, that story is king, and that everything flows from a great screenplay.(more)

Fahadh Faasil and Dileesh Pothans Joji lives up to the reputation they have built for themselves with its detailing, acute observation powers and kookie sense of humour, all backed by stupendous acting(more)

Fahadh and Dileesh Pothan deliver a brilliant adaptation of 'Macbeth'

Fahadh and Unnimaya are wonderful in this scene, conveying what is going on with just their eyes and minimal dialogue. It is an 'understanding' we see repeated throughout the film, Joji spiralling into violence as it becomes the most attractive solution to his problems, and Bincy observing but not saying a word because she wants what Joji wants, too. She thinks it; he acts it out. (more)