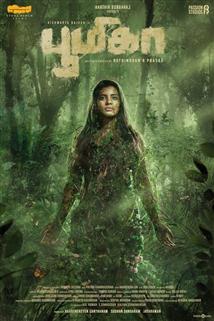 An Engaging Film With Interesting Ideas But Lacks The High Moments

The film turns into a message movie in its final leg. The flashback is again pretty good. The message is sort of on your face but surprisingly the narration is subtle without melodrama. The film would have probably been better without dialogues explicitly carrying out the message of the film. The Boomika character playing out as a metaphor for nature might have sufficed. But the film prefers to shoehorn this fact in its final leg. A special mention about the cinematography. This is a very well shot film.(more)

The horror elements we see in the film are predictable and do not offer anything new. Aishwarya Rajesh's performance is as flawless and she shines throughout, the message which Rathindran handles in Boomika is noble and some of the dialogues are hard-hitting but as said earlier, after a point, things become preachy. The performances of the other actors are just average. (more)

Unlike other films, Rathindran R Prasad wants to make this horror film work logically. So the characters in the movie do what ordinary, terrified human beings would do: run for life and to safety.(more)

All said and screamed, Boomika is a tepid film, which invokes neither fear nor feeling. We�re neither left with the satisfaction of being scared to our bone, nor do we leave purposefully towards being more sustainable. (more)

The film is also overly dependent on its score to make us feel. Prithvi Chandrashekar's insistent score tries too hard to instil fear in us; in fact, even before we are shown something thrilling, the music begins to foreshadow it robbing the element of surprise from the scenes. It keeps throwing fancy stuff like Gaia Hypothesis and PT Extinction, and while these are interesting at a conceptual level, we never find the scenes as involving because the characters seem distant. And after a point, it begins to resemble a feature-length PSA on environmental conservation.(more)