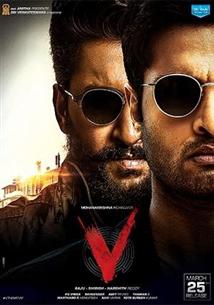 Lacks the quirkiness and cool quotient required to pull off this one!

V might have worked better if it tried to be a fun film. There is this scene where a character before being bumped off makes eloborate plans for a sexual rendezvous and has a decorated bed out in the open in a garden. Guess where he got this fetish from? By watching films of veteran director K. Raghavendra Rao. I was hoping for more such tongue in cheek humour. There are other film references as well including one about the Korean thriller 'I Saw The Devil' and one involving a vintage Hindi song. These are nice little bursts of quirkiness but the film needed more of them.(more)