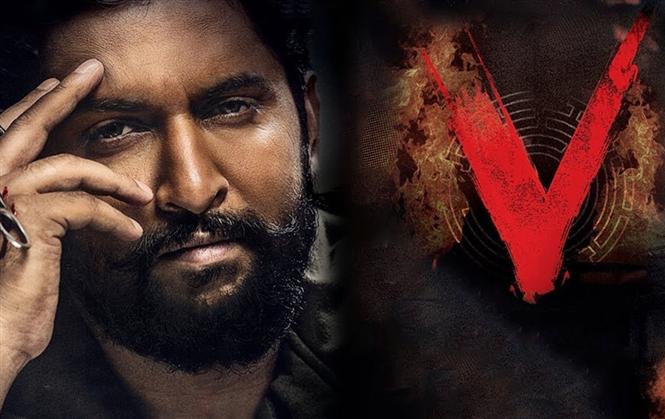 V - Lacks the quirkiness and cool quotient required to pull off this one!

Let's be honest. One look at the trailer of V and you can pretty well guess the one liner of the film. That the makers would have been aware of this is a given. So, what would be your least expectation when you sit down to watch this film? Performances that keep you interested, a screenplay that should keep you sufficiently engaged and entertainment of course. The makers seem to have other ideas. They somehow feel that chic visuals would suffice!

V is essentially a cat and mouse game between a cop and a killer on a spree. With the killer being the hero, there is hardly any suspense that there would be this flashback where he has been wronged. When you are dishing out a done to death and predictable storyline, you atleast ought to have something novel in the presentation. But V follows every cliche to a T! The supposedly intelligent battle between Vishnu (Nani) and Aditya ( Sudheer Babu ) comes across as silly. Vishnu gives clues/riddles before each murder to entice Aditya and create some sort of excitement for us. But these riddles reminded me of a comedy scene from a Tamil film where comedian Vivek playing a doctor prescribes something in an unreadable handwriting and what he has actually written is Vicks! Nivetha Thomas is introduced as though she might have a role to play in the bigger scheme of things. This entire romantic track between her and Sudheer is such a put off and reeks of fakeness. I really thought that there was a reason for this fakeness and a reveal later would make sense of this but alas nothing of that sort happens.

Nani is pretty decent (but nothing more) and is the main reason that V remains watchable. But his characterisation is full of gimmicks and is a mere ploy to make the film appear sophisticated which it never is. The only scene that really worked for me is him having some fun with a stranger on a bus on his way to Mumbai.If you think of it, there is no real reason for him to behave this way. But it works and this is precisely the film that V could have been without even having the need to make any sense of it at all. Something on the lines of the 2009 Ravi Teja starrer Kick is what I am talking about. But V wants to be a darker film. It wants to project itself as a grown up film and it opts for gore to establish its grown-upness. But sadly, it assumes the audience to be infants!

Apart from Nani, it is only Aditi Rao who makes an impression in her brief screentime. The other actors don't really make a mark and having Sudheer Babu play the foil to Nani fails big time. The BGM tries to create an eerie atmosphere but it works only till you realise that it is eerily similar to the work of Ghibran from Raatchasan (Tamil). The cinematography with its dark colour palette remains the sole interesting feature of V.

As said earlier, V might have worked better if it tried to be a fun film. There is this scene where a character before being bumped off makes eloborate plans for a sexual rendezvous and has a decorated bed out in the open in a garden. Guess where he got this fetish from? By watching films of veteran director K. Raghavendra Rao. I was hoping for more such tongue in cheek humour. There are other film references as well including one about the Korean thriller 'I Saw The Devil' and one involving a vintage Hindi song. These are nice little bursts of quirkiness but the film needed more of them.

From Hyderabad to Vizag to Mumbai to Kashmir to Thailand, the film keeps moving across landscapes but the age old plot remains stuck to where it is. Though it aspires, 'V' neither has the quirkiness nor the cool quotient to pull off a win from a done to death template!