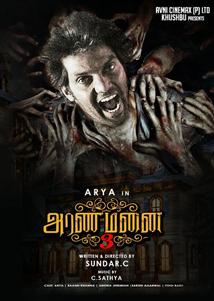 A Film That Defies All Logic!

Just as expected, there are elements of horror, comedy, a little bit of glamour, galatta and an attempt at trying to weave a flashback that holds the reasoning for the ghost's revenge. it is refreshing to see Vivek in this film even though scope for acting is minimal. Arya, who is basking in the success of Sarpetta, is seen only in a cameo for songs and a couple of scenes.(more)

The dumbest film of the year yet

There is nothing novel about Aranmanai 3. At the heart of the story is a huge palace with a dark history. And somewhere in the corner of this palace, there is a locked room. Many haunting secrets remain buried as long as the room is locked. But, once it�s open, it unleashes a dark force, which is almost impossible to contain. Does the synopsis sound familiar? It is because Sundar C, who has written, directed and acted in this film, draws heavily from Chandramukhi, which was the remake of Malayalam hit Manichitrathazhu. Instead of �Raa Raa� song, which is a woman�s yearning to meet her lover, we get �Sengaandhale�, a mother�s lullaby, emerging from a room, which has now become a den of supernatural forces. (more)

A torturous horror comedy that goes on and on

Even with three established comedians sharing the screen (Vivek, Mano Bala and Yogi Babu), the humour is cringe-worthy when not downright offensive. To be able to waste a talent like Yogi Babu�s must take some considered effort. Speaking of wasted talents, in a film that has a seemingly bottomless supply of characters, hardly anyone puts on a performance that doesn�t range from grating to forgettable. Sundar C, who is also the director, and has given himself a meaty role, baffles you with his intro scene�a man who supposedly adores his small daughter is utterly emotionless in an unnecessarily violent scene of a child drenched in paint thinner followed by a trail of fire. (more)

It felt nice to see Vivekh on screen again. His encounters with Yogi Babu and Manobala evoke some half-chuckles. But even that was due to the actors� appearance, mannerisms, and delivery of dialogues. The lines and the situations were trite.(more)