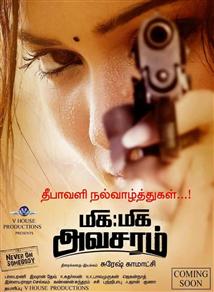 The film takes a very basic and common situation and uses it to make a point about a lot of things - the patriarchal nature of our society, the double edged nature of social media and how the hierarchy of power works. I particularly liked the way how most of the characters were sort of very real and prisoners of their situations. There was a humane side to most of them but they can do only so much.(more)

The only takeaway here is the decent performance by Sri Priyanka, who manages to convey the harrowing experience women face during such situations.(more)

An Unnecessarily Stretched Out Drama About Answering Nature's Call

A better filmmaker could have done something great with this idea. Cleverer writing and a different tone could have worked too.(more)

Instead, the film takes an interesting turn in addressing sanitary issues that women in particular face. A female cop, stranded on the side of a road, with vehicles passing by in high-frequency and with no access to public restrooms or sanitary facilities whatsoever. How does she answer nature�s call? These are decent ideas that depict the day-to-day struggles of someone working in the police force. But how much of an impact the film makes in handling these issues is questionable.(more)

The writing could have been better and the length of the movie also plays spoilsport. Nevertheless, MMA is a well-intentioned film with a message. These small glitches can be overlooked.(more)

Miga Miga Avasaram is an overly long film for a way too simplistic story. In the end, I have to confess, I left the theatre quite 'pissed off' with the experience.(more)

An Important Issue Gets Insincere Treatment

If women empowerment was their idea, I don't understand why the other female characters in the film were not used to help the female-centric story along. With several obvious loopholes comes a film that is nothing near inspiring and does not celebrate women police in any way.(more)

Miga Miga Avasaram is a well intentioned film and the earnestness is very apparent. But craftsmanship is a different story altogether. Given the crisp running time and what it wants to talk about, the film is a worthy attempt that warrants attention.(more)