GV Prakash's Bachelor directed by Sathish Selvakumar is a mixed bag that offers extremely good as well as dull and draggy moments. As much as we would be engaged in the first half, the chances for the same in the second are slim to none. The ending though, was predictable yet genuine. If the film had dealt with this toxic relationship in depth even in its latter half, we may have had one of the best intense-romance films in recent times. (more)

Bachelor is a fascinating, indulgent anti-romance involving a flawed character

For most parts of the film, watching these contrasting characters get into a relationship and then struggle to get out of it makes for an engaging watch. It helps that the handheld shots that Sathish relies on (Theni Eswar is the cinematographer) to narrate this tale makes us feel like we are in the midst of these characters and being part of their lives. The director also peppers the scenes with humour, especially in the second half, when the film turns into a bizarre courtroom drama, to make it entertaining.(more)

Premise is interesting and in a way daring!

Director Sathish Selvakumar's characterisation of Darling seems to be based on a real-life person. But it is hard to believe that a sophisticated girl would accept someone like Darling and agree to a relationship. Despite some logical flaws, Bachelor has an engaging first half due to the comedy and explicit dialogues but the director could have done some editing in the second half which is stretched. The film at nearly 3 hours needs some trimming, to make it a bit more racy. (more)

Solid writing in the first half along with strong technical work make Bachelor a good outing.

Among the performers, GV Prakash does a fine neat job but it is debutant Divya Bharathi who steals the show. She looks stunning and emotes well. Once Munishkanth enters, his counters and chemistry with Bagavathi Perumal save the sinking second half to an extent. The film also has a runtime of a little less than 3 hours, which affects the engagement. A few scenes in the second half could have been trimmed to overcome this problem. (more)

Bachelor starts off in an interesting fashion but loses its fizz on the go. An average watch!

The duration of the film is a concern since the pace of the movie is also slow, especially in the latter half. Had the film been high on engagement, the runtime wouldn't have mattered, but due to the slow-paced screenplay, you need to hold your patience. (more) 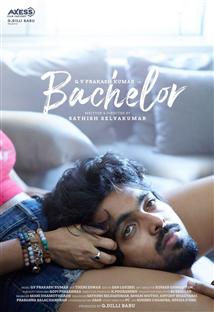