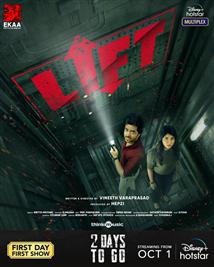 Quickly rises to the top before coming down in its final act!

An IT employee is bound to have worked late night in office and some of them have these huge infrastructures. During the film�s opening credits, there are these aerial shots of the IT corridor in OMR Chennai that gives you a glimpse of these buildings. And if you have had the experience of staying back in these premises, you would know it could be unnerving if you end up finding yourself without company. This plausibility is what really ticks in Lift.(more)

Kavin starrer is a refreshing horror movie on the corporate trap

The most terrifying idea in Lift is not the vengeful ghost in the office but the corporate office itself. Vineeth wants to talk about a toxic work culture that treats employees like commodities and discards them after use.(more)

It was interesting how, in addition to the usual jump scares, there is also a refreshing method of Instagram/Snapchat filters to ascertain the presence of the paranormal. Also, it is a wonder how the idea of setting a horror film in a sprawling IT company hadn�t been explored in Tamil cinema yet. The cubicles, the rolling chairs, the unending pile of papers, the huge glass panes, and of course� the emptiness of it all make it perfect for a horror film, and also give a Nakamura Towers feel. Make a Die Hard-esque film in an IT complex� ASAP(more)

This thriller works in parts

The first half of the film thrills us with a lift that stops at one floor only once, a locked cabin where you see objects flying here and there, a headless man, moving pair of shoes, and the blood-stained foot of a ghost. But after a point, things turn repetitive and test our patience. Though the climax is topical and emotional, the director should have established the conflict somewhere earlier in the film. (more)

An engaging horror thriller that needs a strong writing

Kavin will win your heart with her performance. He has made a promising comeback and as someone who is scared due to the paranormal activity, throughout the entire flick, he has done a great job. Amrita has performed well and has been a good support to the protagonist. (more)

The backstory is hard-hitting and quite impactful, however, when it is revealed only towards the tail end and fails to serve the purpose. Traces of it should have been brought well in advance to keep the viewers invested. The first half also makes us wonder how the spirit has most of the surroundings under its control, yet it is incapable of achieving its goal with all its might. (more)

Despite its shortcomings, Lift works fine because of its tension-filled screenplay!

First things first, Lift is a film that stays true to its genre and we need to appreciate the team for not diluting the premise with deviations. Debut director Vineeth Varaprasad has constructed the screenplay in such a way that there is something happening in regular intervals, keeping the audience engaged.(more)