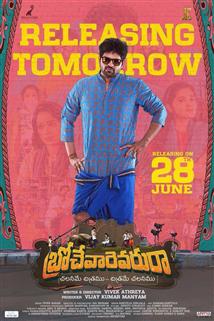 Brochevarevarura is an extremely likable fun film that is whacky as well as simple and endearing.(more)

A comic caper pulled off well for the most part.

Go watch Brochevarevaru Ra this weekend if crime comedy, coming-of-age films and comic capers are your cup of tea because Vivek Athreya's film delivers all that and more. Just don't expect the usual commercial elements or even a love story thrown in, for you will be left disappointed. Watch this one for the freshness and laidback-ness of it all and you will love it. (more)

Brochevarevarura is a crime comedy which has good fun and entertaining thrills. The fun is generated in a simple manner and keeps you hooked for the most part of the film. The lead cast performance will surely win your hearts. However, things become a bit slow and predictable in the second half but that does not stop you from having a good time watching this film. A clean comedy which will not disappoint you this weekend. Go for it.(more)

Hop on for a fun ride

Cinematography is a delight and Vivek Sagar's music blends into the story. Despite a stereotyped role, Sree Vishnu steers the film with his middleclass looks and confidence.(more)

"Brochevarevura" is a pretty simple crime comedy that is peppered with interesting screenplay and offers some genuine laughs. In a nutshell, it makes decent watch this weekend.(more)

We have seen many crime comedies with kidnap episodes since Money in Telugu. It's a genre that's pretty familiar. However, director Vivek Athreya has used an interesting screenplay coupled with right actors to narrate this simple story in an engaging manner. Plus points of the film are screenplay, casting and entertainment. On the flipside, the movie pacing slows down once the twists are revealed. On a whole, Brochevarevarura is a decent kidnap drama!(more)