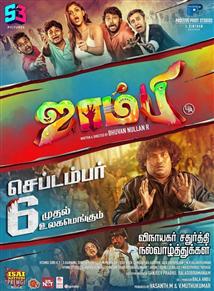 A Boring Attempt At A Zom-Com, With None Of The Jokes Touching The Funny Bone!

Bhuvan's Zombie neither thrills, nor makes you laugh. The zombie driven, fear factor layer is completely missing and we do not know if we should laugh or get scared for the scenes as, none of it demands for neither. The entire idea of a zom-com seems to be misunderstood and the purpose of the film seems unfulfilled. Most part of the film is stuck in that resort and there is no progress in the plot that would keep you hooked to the screen. A forgettable experience for those expecting entertainment or comedy!(more)

By the time the film ends, you wish you had rather suffered a bite from a zombie rather than having sat through its painful dullness.

The plot involves these individuals who have to fend off a zombie outbreak in a resort, but nothing impresses - not even a bit. With such material, even the performers, some of whom we have enjoyed watching in other projects, come across as annoying. If you want a sample of the film's tactless Ness, you only have to look at a scene where TM Karthik, who was accused in the #MeToo movement, gets to question another character's behaviour with ladies. By the time the film ends, you wish you had rather suffered a bite from a zombie rather than having sat through its painful dullness.(more)

Assault on the senses

But there is a way Tamil film industry can avoid such treacherous roadblocks in the future, and it involves the film certification board. If the CBFC can aim their offending content detection radar away from Yashika Aannand'' cleavage, and towards such films itself for once, that would be a welcome change.(more)

Bhuvan R Nullan, first of all, why did you make this film? Please, answer. Tamil Nadu needs to know. Zombie has a lot of scenes that look like stand-alone skits stacked up unevenly. Further, the screenplay is too choppy to make any sense as the plot goes irreparably haywire. Also, the LGBTQI+ community has been shown in a poor light, yet again.(more)