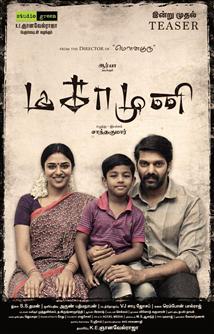 A slow yet intense drama, that is held together by some fabulous acting and sharp dialogues!(more)

The sharp dialogues also include digs at the current socio-political scenario, and even add a touch of levity at times. Thaman's background score is effective in adding to the tension in the scenes. And Arya comes up with a remarkably controlled performance that does a fabulous job in capturing the contrasting nature of both the brothers as well as the internal anger of the protagonist. Watch the scene where he puts across his point in a firm but polite way with the principal of his son�s school, after the young boy comes home with a black eye from a teacher's punishment. It is proof that given the right role, this actor can be highly effective.(more)

A major drawback is that the film does have from a loose end. Despite showcasing an unflinching eye for detail and exposition, the writing misses to explain the reason behind a character ending up in an asylum for the mentally underdeveloped. Overall, Magamuni is a deeply affecting film that presents a unique vision on violence and revenge.(more)

Magamuni is a classic mainstream revenge thriller which is a must-watch for its solid writing and flawless performances of the lead actors. We are going with four out of five for Magamuni. Go for it!(more)

Arya headlines this offbeat, non-commercial revenge saga that gets many things right

Arya's bold decision to pick an offbeat subject like Magamuni and give one of his better performances in it is worthy of praise. His portrayal of Muni, a character that seems to have been plucked out of director Bala's handbook, is understated but it is as Maga that he really shines. He gets help from some apt background score (by Thaman) that supplements the mood of the sequences. All this has a lot going for Magamuni, a decent take on karma and how what goes around comes around.(more)

A slow-burning thriller whose parts are greater than its sum

Magamuni is one of those films where the sum is, unfortunately, lesser than its parts. While the film does manage to hold the tension until the end, you walk out wondering if that was all. That question makes me put it in the space between a good film and a great film. And that sometimes makes all the difference.(more)

Director Santhkumar's second film Magamuni is an excellent social commentary on casteism, discrimination, politics and spirituality. The film starring Arya is a slow burner, but will pry open your eyes.(more)

Magamuni is gripping and thrilling. It stands out for the way the director has delved into the subject of Karma and redemption, and also the socio-political issues, without being preachy. (more)

Santhakumar and Arya deliver the goods

The story and screenplay are taut, the dialogues well-written, particularly for Muni's portions. This guy doesn't get into unnecessary arguments and likes to resolve issues in a peaceful manner. He is naive and trusts people implicitly, too. Muni's views on life, however, set the tone for the rest of the film. He casually points out how it�s difficult to eradicate caste, a social evil, equating it with plastic.(more)

Arya shines in an innovative take on karma and redemption

Magamuni will go down as one of the best works of Arya but the film belongs to Santhakumar, his ideologies and writing. It's amazing how he brings in a very interesting allegory on spiritualism and karma in a simple tale of revenge.(more)

Arya doubles down in this enthralling experience

Santhakumar is absorbed by too much attention to detail, but that can be forgiven as the movie is arresting for the most part. Well worth the watch as it brings out some deep-rooted issues of society without being moralistic and self-righteous.(more)