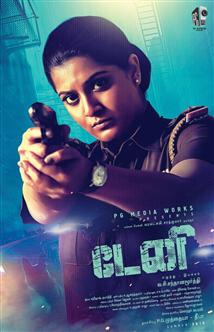 Varalaxmi And The Dog Look Helpless In This Immature Murder Mystery!

Danny is that film that tries hard to be genre specific but still lacks the fizz to engage OTT fans. Varalaxmi and the dog seem to have tried hard to keep us interested but the writing and lethargic making pull down this murder mystery attempt. If any positive it could just be that makers these days have become fully aware that adding commercial elements for the sake of it, would not work(more)

Scenes are rudimentary, written just to serve as a means to an end, with no effort to make it coherent or interesting. For all the build-up Danny gets, the cute canine doesn't get much screen space. But seeing how the film treats him, one wonders if the answer to solving all the crime in our State is just making sure more police dogs are brought in. (more)

Even with its flaws, Danny has its own highs.

The short run-time could have worked in favour of the screenplay, had there not been any deviation from the main plot. However, a few scenes are a letdown especially the comedy scenes. Their absence would actually make more sense in the movie. The director has also tried to bring in comedy at a few places amidst the serious tone and it may seem to be funny on paper, but fails in the execution part.(more)

Even the cutest canine can't keep afloat this crime drama

Danny loses track due to inclusion of mindless comedy sequences that are unfunny, and only takes away the time that could have instead been used to spin a more gripping narrative. (more)