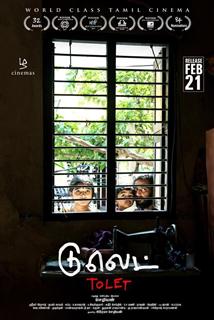 Pure Cinema That Keeps It Simple And Effective!

ToLet is not an overtly political film but Chezian does point fingers at the absurdities in the society. For instance, the irony of people from the film industry finding it difficult to get rental homes but being welcomed with a red carpet to rule Tamil Nadu. And as the film shows, money isn't the only parameter that dictates how others treat you. Your caste, religion and food habits are factors that would decide whether you can rent a home or not.(more)

A moving drama about middle-class dreams and reality

Chezhiyan treats To Let as realistically as possible. The influence of world cinema is quite evident in his treatment and rich tributes are paid to the masters like Mrinal Sen and Akira Kurosawa among others. The film features mostly newcomers but their performances really standout. Siddharth as Dharun is easily the pick of the actors as he delivers the kind of performance that is very rare from someone so young. Santhosh and Sheela as the couple turn in matured performances.(more)

That was also a single-minded story about a search (for a pair of missing shoes) - but the one-note premise blooms with a number of "moments". To Let could have used some of this tonal variation. In the performances, too. We get the mannered �Indian art film acting� � the downcast faces, the pauses that linger a beat too long. The cast is undoubtedly earnest, but the film truly comes alive in a brief scene with a broker who escorts Ilango. The actor is fantastic. He captures a number of shades, from sympathy for Ilango to supplication before the prospective landlord. I wanted to see more of him.(more)

To Let is an honest reflection of the lower middle class' forage for a dream home. An adroit piece of art that must not be missed.

To Let beautifully explains that, and transcends the definition of cinema to become an experience that everyone must feel. Chezhiyan has made a brilliant piece of art called To Let. It's our duty to not let theatres look like empty houses with the To Let board.(more)

The film is Chezhiyan's sincere attempt to tell a story in the most realistic way. Hence, it comes as no surprise that it won the National Award under the Best Tamil Film category.(more)

A beautiful portrait of memories

To Let is a careful manifestation of art cinema. The couple gets an expensive offer from a broker. They have no other option but to take it. On the way back, Amudha says, "Ilango, innoruvaati andha vazhiya poriya?" They take one last look at the house. By this time, the fourth wall breaks. Everything - her voice, the way the scene is staged and executed, haunts the viewers.(more)

In the initial portions of the film, we repeatedly get throwaway shots of a sparrow that has built its nest inside the family's home. Its fate gets decided by an act of momentary forgetfulness while a character enjoys a simple comfort. In a way, families like Ilango's are like that bird, their fate decided by a section of the society that has forgotten about the existence of others while enjoying a few perks.(more)

An Update On Balu Mahendra's 'Veedu' For A Post-Liberalization Era

To Let works like an upgrade on Balu Mahendr's film for a post-liberalization era. The 2007-set film is informed by past and present where socio-economic disparities have only grown larger. One can even say it is informed by the film's future - the present times- when there is a strong reinforcement of caste and majoritarian identity.(more)

To Let showcases the 30-day journey of a lower middle class couple who is looking to move from one rented accommodation to another in the city, after being unceremoniously asked to leave by their landlord. Through the lives of Elangovan (Santhosh Sreeram), an aspiring filmmaker, his homemaker wife Amudha (Sheela Rajkumar) and their kindergartner son Siddharth (Dharun), the film explores the strife of families who do not have a steady income or 'respectable' job, in the post IT boom era in Tamil Nadu.(more)