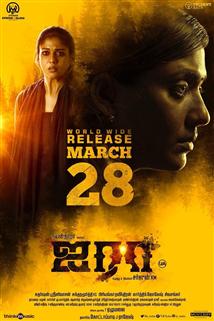 Lacks The Punch And Engagement Factor Of A Gripping Horror!

Nayanthara's Airaa seems to have a good intention as it tries to address a lot of relevant issues and talks about them in certain parts. But the majority of the film lacks the punch and the engagement factor that one would expect from a gripping horror based emotional flick. Nevertheless, it has a few moments on offer for those who enjoy Nayanthara's performance and a tinge of horror elements. If for a more engaging first half and a slightly better justification for the revenge towards the end, the film would have been a lot more engrossing and intriguing.(more)

Barring a couple of moments, Airaa is underwhelming and is let down by its writing.

There are a couple of moments that are visually exciting - a shot where things in a room seem to be floating in zero gravity, and a niftily edited sequence that cross-cuts between the action happening in two places - and KS Sundaramurthy tries to salvage the film with his background score, but they aren't enough.(more)

Nayanthara hits all the right notes, in this engaging story

Airaa would have worked with Bhavani's portions alone, the horror angle actually takes away the novelty of the film. Had director Sarjun focused only on the emotionally moving story of Bhavani, Airaa would have been a classic. The butterfly effect to the horror thriller is another interesting aspect of the film. Airaa for Nayanthara�s towering performance as Bhavani, as she quietly seals a place in your heart!(more)

Director Sarjun KM's Airaa starring Nayanthara in two roles aims to be a thrilling horror flick laden with many hidden messages. But, logic takes a beating and makes it an underwhelming film. Watch it only for Nayanthara, and only if you really want to.(more)

Airaa falls just short of an exciting package, due to a less convincing climax.(more)