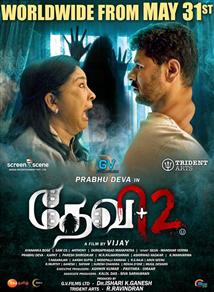 With nearly no horror and only 'attempted comedy', Devi 2 is just another flick that you might not regret missing!

Sans the idea of having 2 ghosts in Devi 2, there is nothing fresh about this typical horror comedy!(more)

A half-baked story with a decent star cast with good potential is let down due to lack of interest which is evident throughout.

The parallel tracks involving Nandita and Dimple do not leave any impact and the mash-up of scenes from other films in a crucial scene shows dearth of originality. Sonu Sood and RJ Balaji make brief and ineffective appearances, and Kovai Sarala does what she does in most of the films. The songs do not add any value to the film, and the conflicts and antagonists are poorly written. A half-baked story with a decent star cast with good potential is let down due to lack of interest which is evident throughout. Overall, Devi 2 joins the long list of unimpressive sequels in Kollywood.(more)

In spite of its numerous follies, Devi 2 still ticks some right boxes when compared to the recent visual revulsion, Kanchana 3.(more)

To conclude, it's hard to say what is more embarrassing in Devi 2, a poorly made horror comedy from director Vijay who has completely lost his form.(more)

Atrocious at many levels

Dear Sir/Madam, now tell me something; what would Krishna do when the lights go out? And this is coming from the guy who wanted to make love to his wife two scenes before. Of course, these are questions you can't ask in an AL Vijay film. There's a chance that Devi 2 might work for some, only if it's seen as an unintentional comedy of sorts.(more)

The problem with Devi 2 seems to be that: one minute it expects us to go 'tch tch' looking at the plight of the poor wife Devi, and the next minute it wants us to laugh at her stints with Kovai Sarala. Not just Devi 2, the genre of horror in K-Town tries to be two things at once. While it is all fine on paper, the journey to the screen is not as smooth. You can't scare as you tickle.(more)

This Prabhudeva starrer is a lousy sequel with no redeeming moments

Devi 2 is neither entertaining nor engaging. Despite sincere performances by Tamannaah and Prabhudeva, the film has been let down by its poor writing.(more)