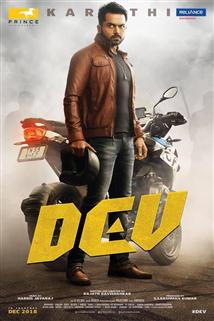 Bland Romance That Fails To Strike A Chord!

The climax of the film has Dev scaling the heights of Everest. The intention was probably to establish love as an adventure or as the film puts it - to test the strength of the mind. But what we get is only the tiredness after an exhaustive adventure(more)

Karthi's Dev is a visual delight with a few good moments, but could have been better with an engaging treatment.

There is a sequence where Karthi is seen scaling Mount Everest. He starts the trek well, but loses track mid way. Similarly, the film too starts off well, and ends up like the trek. But, the film is watchable for the fresh elements that are sprinkled at various places.(more)

If you want to describe Dev, you could very well go ahead and call it a misadventure.

The entire thrust of the film seems to be giving a rich look to the film. Cameraman Velraj has come out with some stunning visuals, especially in the lovely lush Ukraine. Harris Jayaraj�s music is peppy but repetitive and there are far too many songs thrust into the narration making the film bloated with a run time of 2 hours 38 minutes. Karthi is the only saving grace in this film. He performs his role with elan and style. Rakul's role has been poorly written while Prakash Raj and Ramya Krishnan have mere walk-in roles.(more)

Way too predictable to ever surprise you!

Velraj' s scintillating grand visuals capturing exotic locales and is a treat to our eyes. Harris Jayaraj's songs are repetitive and often comes as speed breakers. Overall, Dev is way too predictable to ever surprise you!(more)

Karthi is the saving grace of this visual feast

With good music and beautiful visuals to support, Rajath's screenplay however falters, as it oscillates between presenting a love story and a tale of self discovery, and in an attempt to present a lot of things, ends as an attempt that could have been way better. All said, Karthi saves Dev to an extent, as he solely shoulders the movie despite its issues.(more)

The film on the whole is too pretentious for words but is outright glossy, thanks to Velraj's visuals. The characters in Rajat's universe are far removed from reality that one wonders where such people exist. The first half is taken over by RJ Vignesh and Amrita who feature as Karthi's friends. RJ Vignesh disturbs the audience with his verbal diarrhea that never seems to abate. Shaky characterizations send the viewers into a tizzy. The length of two hours plus 30 minutes also don't help the audience.(more)