A Cerebral Thriller That Does A Neat Job!

The dialogues are good. The film touches upon relevant topics of relationship and morality. The hero isn't always right in the film. When Kaalidas casts aspersion on the character of few women, George retorts by asking from when police turned into moral police. This is that kind of a film that doesn't judge its characters as good or bad. We have a pimp who calls out a guy as male chauvinist for speaking ill about women. I am hop(more)

Kaalidas is a smart investigation thriller that conveys an important message to this fast-moving society without being preachy.(more)

A reasonably engaging whodunit which could have been way better

Bharath fits well in the role of a dedicated and stressed cop. Ann Seethal makes a notable debut as a dejected homemaker and Suresh Menon makes his presence felt in many scenes as the senior cop. (more)

Bharath starrer is a cop thriller with sensible writing

The Bharath, Suresh is a cop drama, quite unlike the usual ones. With some impressive writing and by avoiding stereotypes, the film stands out.(more)

Kaalidas is a taut thriller with neat performances and an engrossing second half.

If you like a good crime-thriller with a slightly derivative, yet a mildly surprising twist, Kaalidas promises a good plot. The gripping and tense screenplay of this partial crowd-pleaser might just keep you guessing for most of the time.(more)

A sensibly written and directed whodunit thriller that will engage you for its intriguing story and screenplay!

Kaalidas is a film that deserves a watch for its fairly engaging screenplay and smart writing with some neat performances.(more)

A Promising Whodunit That Could Have Been More Competent

The film drags a bit in quite a few places. While the music and the songs (even the lyrics) are interesting and add character to the film, it feels heavy and sudden at times. You are very aware of the music that doesn�t blend in all that smoothly. The ending (not a spoiler) also left me feeling a bit cheated, not in a good way.(more)

The last half-hour could have used a few more drafts. And yet, it's refreshing to see a movie cop who isn''t a supercop. Bharath and Suresh Menon make a solid team. (more) 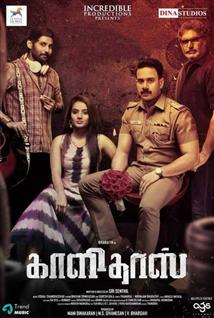