Right from the start, Champion keeps you invested and has you genuinely interested. There is a good vibe in the sense that you can feel Suseenthiran is in complete control over the proceedings. The performances are good. Debutant Vishwa is apt. Narain is superb and Manoj is a surprise. You know villainy works when there is a feel of discomfort. There is this constant feel of uneasiness when Stun Siva is around. The writing is clean. The one liner is nothing new and quite predictable but Suseenthiran keeps things interesting. (more)

Champion is a watchable sports revenge drama for the earnest performances of Vishwa and Narain.(more)

Champion only champions the cause for Susienthiran to script better films.(more)

Suseenthiran's Champion has the right mix of sports and emotions that makes it an engaging watch.

Champion is an engaging sports thriller that is worth watching at the theatres. The various interesting characters, their motives and the multiple conflicts presented with balanced emotions in the plot, make Champion work.(more)

A generic mixture of sports and gangster action, yet neatly packed with a believable screenplay!

we don't see Suseenthiran in full form but nevertheless it is his best work in the recent years.(more)

Susienthiran redeems himself with Champion

The result is a film that is engaging for the most part even if its storyline is a familiar one. The writing is largely satisfactory, with character arcs that feel complete, and scene progression that doesn't seem uneven. And the filmmaking feels gritty enough for this material. But the derivative storyline and dull dialogues rob the film of punch(more)

This Susienthiran-directorial sticks to a template and fails to impress.(more)

A sports drama with revenge flavour

Suseenthiran has delivered interesting sports flicks like Jeeva and revenge flicks like Pandiya Nadu and Naan Mahaan alla, but combining sports and revenge, he has given a very routine flick with champion, which lacks gripping, high moments or novel twists. It's high time Suseenthiran focuses on one central theme in a plot and present it interestingly, instead of forcing subplots and ending up giving weak, uninteresting conclusions to them. (more)

Another Predictable Revenge Drama In The Garb Of A Sports Film

In an attempt to keep up with a particular trend, they are only failing to be true to the medium, in turn, churning out mediocre films with no impact.(more)

Champion is the third football film to hit the big screen in the past two months, the most recent one being Kathir's Jada(more) 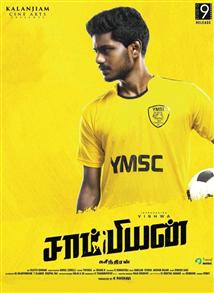