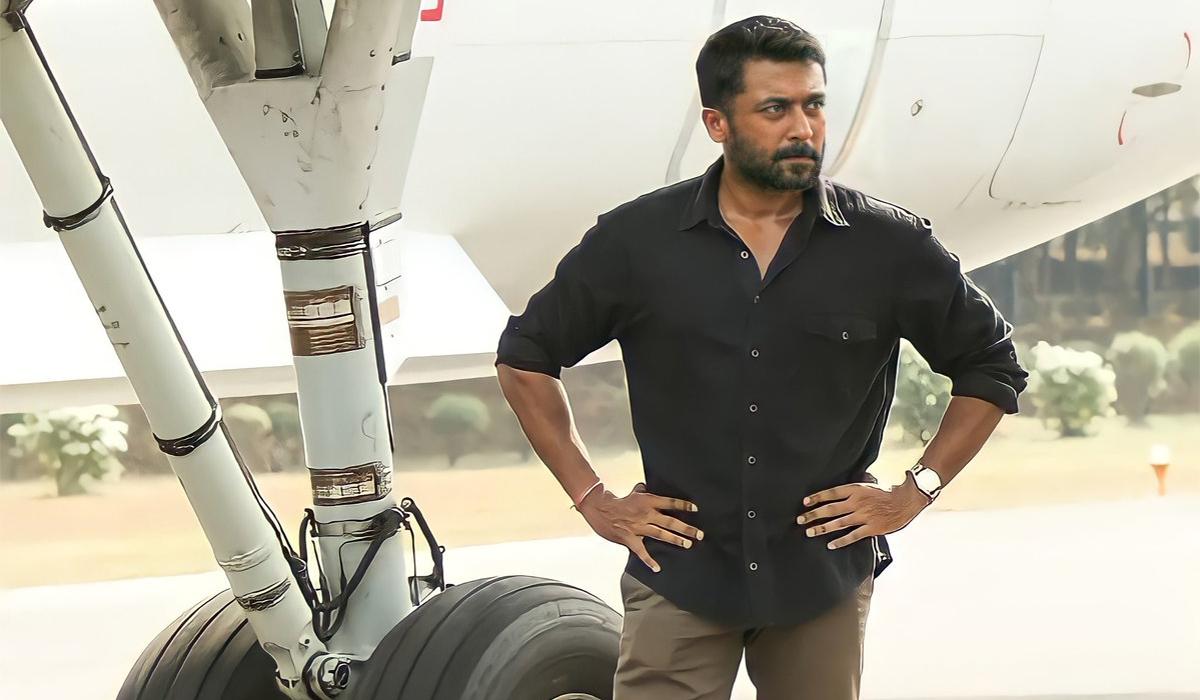 The plot is an open secret and is about the uphill tasks faced by the protagonist in setting up his low cost aviation company. The film veers towards the template good vs evil battle from midway. More about that later but what really works for the film is the way it sets up its characters and establishes a fine emotional bonding between them. The relationship between Nedumaran (Surya) and his wife (Aparna), his mother (Urvasi), his father ('Poo' Ram) and his friends are all well defined and the actors playing these parts are brilliant.(more)

Suriya and Sudha Kongara's Soorarai Pottru is an inspiring biopic.

Suriya carries the entire film on his shoulders. He laughs, he cries and lives the moment he is not Suriya but Maaran on screen. He effortlessly brings out the anguish right in his performance and at times, with just his eyes, when his over-ambitious plans, seem to go haywire, at least initially.(more)

The writing is pretty solid all round. From the efficient analogy of a Udipi hotel vs five-star that she uses to make the audience understand her protagonist's dreams to the heartwarming scene of an entire village chipping in with their money to make this dream come true, the director gives us memorable moments and memorable characters. (more)

Suriya starrer is bound for a colourful take-off...

Suriya may have shed some of the superstar symbols for Kongara's film but he is still the star in the movie as he proves with his skills. His genius can be noticed in scenes of him begging for money, his portrayal of the hesitation while asking money to his wife and the changes in his attitude to Paresh when he first meets him as an inspiration and later as his tormentor.(more)

Sudha Kongara manages to mix the 'biopic' portions and 'personal life' portions in such a manner that everything makes sense. Despite not getting answers to many questions popping in your head (many could be baseless), you still find yourself rooting for the antagonist, and that�s where Sudha's vision wins. Barring a few shabby CGI created flight sequences, the film manages to look beautiful. (more)

Suriya-starrer Has a Turbulent Flight

Kongara's work is a classic story of a poor man attainting heights he thought he would not be able to, and she peppers the narrative with what appears like unsurmountable barricades, but Nedumaaran, jumps over or rather flies over each one of them. (more)

One of the biggest successes of Soorarai Pottru is that it is a fantastic love story. It shows us marriage equality, in ways that are intricate. More than once, we see Maaran standing at the crossroads of his dreams and family. (more)

The film is earnest in casting Maara as a 'socialist capitalist' (he's an anti-caste Periyarist) but doesn't explore his politics beyond punch dialogues and how he reconciled his principles with his business ambitions. Films like The Social Network that don't stop short of the nitty-gritties of business not only entertain but also educate the viewer. Soorarai Pottru, in that respect, leaves us with an all too familiar story of corruption and red tape. Considering there's so much else in the script which doesn't fall into a pattern, it's a pity the 'suit villain' didn't escape the cliches.(more)

Suriya delivers an ace performance in this soaring, sensitive drama

The key difference between the hero and the villain in this film isn't about physical strength; it's about mentality; it's about nobility of thought. It's simply about how Maaran cares for others more than Paresh, more than most do. (more)

A gripping tale of hope, triumph and more

Soorarai Pottru covers almost every aspect of Gopinath's life - his village days, his stint with the Army, farming and his launching of Air Deccan. The flashback sequence in which Nedumaran Rajangam begs for money from people at the airport to make an emergency visit to his hometown justifies the intensity of his dreams. Only then do we start to understand Maara and the rebel in him. There is a tautness to the storytelling, especially until the interval, that keeps us gripped.(more)

Suriya's way, all the way

Soorarai Pottru is marred by the high-pitched melodrama whistled up every time the script needs to create fan-pleasing moments. Given Suriya�s mega popularity, that is an always present temptation, and the film gives in, much too often. (more)

A solid and satisfying watch

Suriya is the biggest plus of this film and the way he laughs, cries, gets frustrated, fight, and rise in the film is a treat to watch. Heaping praise on his physical transformations has become a cliche so let's not talk about it. (more)

Suriya hits a six with this inspiring journey of a dreamer

The actor has literally transformed as Maara, letting go off the body language and dialogue delivery that were monotonous in his recent movies, and has delivered a power-packed, intense and emotional performance, carrying the movie and the character on his able shoulders. (more)

The writing triumphs in the portions of the entrepreneurship-loving couple. The crackling chemistry of Suriya and Aparna Balamurali is a lesson on weaving in solid relationships even in a fast-moving biopic. Aparna's character is so real and well-rounded, giving mileage to the notion that women write women better.(more)

This Suriya Starrer Is Born To Fly High

The backbone of the movie is the well-written screenplay, that has brought together the emotional highs and lows in protagonist Maara's journey with absolute conviction. Soorarai Pottru does not limit itself to a one-man show, but most of the characters get the space to create a mark. Director Kongara deserves special applause for the brilliant casting of the movie.(more)