A well intentioned remake and a fair film when seen as a standalone.

While the film sort of plays down the sensuality factor it does not completely shy away from the crux as well. The phone call with a youngster who makes a living by selling lingerie and is guilt ridden for the way his mind wanders is an instance. These portions work. The acting all around is pretty decent. Every actor in Tumhari Sulu looked the part whereas here there is clearly an attempt to oversell. Again this is more an issue for those who have seen the original as this film on the whole could actually be a lot subtler than the average Tamil film. The portions in Viddharth's office and the kid's school are what look definitely contrived. But whatever said, Kaatrin Mozhi does manage to keep up the spirit of the original.(more)

Breezed up by some humour and sentiments

The plot of an ordinary housewife handling an adult radio show opens up a trove of possibilities in humour and psychoanalysis but 'Kaatrin Mozhi' does not go beyond the obvious in content or making. Go for it for the performances of Jo and Vidharth and the other cast members and you get a few genuine humour and sentimental scenes too.(more)

This remake of Tumhari Sulur is an engaging entertainer that manages to retain the spirit of the original.

Kaatrin Mozhi is an official remake of the Bollywood film Tumhari Sulu, which won Vidya Balan rave reviews and a bunch of awards, and Radha Mohan manages to retain the spirit of the original, but does he surpass it? While the chemistry between Viji and Balu lacks the sizzle, and the 'hello', the sass, this one definitely is an engaging entertainer.(more)

Kaatrin Mozhi has its beautiful moments and we recommend you to take your family or loved ones and enjoy the weekend at the cinemas.(more)

Radha Mohan and Jyothika give you a bowl of curd with Sugar, along with this mature feministic film.(more)

Jyothika film tries to be Tumhari Sulu but fails

In a nutshell, Kaatrin Mozhi could have been Tumhari Sulu. But the animated performances from Jyothika and Lakshmi Manchu ruin the experience a little. Kaatrin Mozhi starring Jyothika evokes laughter here and there. However, it falls short of being a faithful remake of Tumhari Sulu, says our review.(more)

Jyotika steals the show in this heartwarming remake

The delicate balance that every woman needs - embracing the world outside with the same warmth she'd exude at home - is the very essence of Kaatrin Mozhi. While the Tamil version retains the essential spirit of the Hindi original Tumhari Sulu, it also lends its own local flavour and comedy that works to its advantage.(more)

Kaatrin Mozhi has new scenes and characters that weren�t in Tumhari Sulu. Of course, Kaatrin Mozhi isn�t a perfect film - it has flaws, a couple of size-ist jokes, but works largely because of Jyotika, the screenplay and writing. Radha Mohan knows what works, what doesn't and has packaged the film neatly with supporting characters- Elango Kumaravel, MS Bhaskar, Manobala, Uma Padmanabhan and Mayilsamy. Some of the scenes took me back to the Mozhi days. It could be because of the apartment-milieu. Jyotika pulls off Vijayalakshmi effortlessly. There are no pretensions; I guess that is what has endeared her to the audience. And hey, AH Kaashif has also made a promising debut as a music director!(more)

Jyotika's remake is nothing like Tumhari Sulu, and that's good

Kaatrin Mozhi is about understanding what "50-50" means, not just in a business partnership, but at home, too. It is about believing in yourself, even if it is in something as small as lemon and spoon race, or as important as a job - one that your family thinks is not respectable. It is about fighting stereotypes, prejudice, sexism and more. The fight is real, and the victory that comes at the end is sweet. And yet Kaatrin Mozhi (the language of the wind) is as breezy as a comedy can get.(more)

This Remake Could Have Used Better Craft And Performances, But The Core Still Works

Tumhari Sulu, the original, was delicately textured and beautifully directed. But its remake plays out like a loud TV serial(more)

The biggest problem of all is how little craft is on display. It's almost like someone's set up a camera on a tripod and simply captured a play. There are long stationary shots of characters engaged in conversation. Save for the overused top angle shot of the city - while Viji runs her show � the film makes for an unstimulating visual experience. (more) 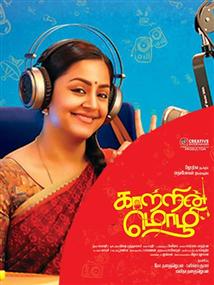