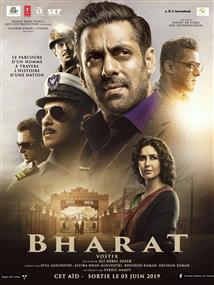 Not Exactly An Ode To The Nation, But Thankfully An Engaging Saga

Ali Abbas Zafar's combination with Salman Khan does manage to stay relevant with Bharat, despite not having the charm of Sultan or the zing of Tiger Zinda Hai.(more)

Bharat has its own share of problems, beginning with the near-three-hour runtime. But when people wait a year for a Salman Khan Eid release, can you really blame the superstar for giving his fans their larger-than-life hero in an out-and-out entertainer, replete with song and dance?(more)

More a miss than hit

Katrina Kaif makes the most of her role, as the feisty 'Madam-Sir' who comes into Bharat's life, and who stays on, without, gulp, either 'mandap' or ;'mangalsutra'.(more)

BHARAT is a super-entertainer with emotions as its strong USP and Salman Khan like never before. The superb combination of Salman Khan, emotions and the release period [Eid] will ensure fireworks at the ticket windows. At the box office, it will fetch bumper profits for all concerned.(more)

Bharat is a slice-of-life story with maturity and restraint often lacking in a typical film featuring Salman Khan.

For a film like Bharat, Vishal- Shekhar's music with songs like 'Slow Motion' and 'Chashni' suffice, but rarely break out. 'Zinda,' is an exception that stays with you for a while. For all its virtues, Bharat falls short of becoming a tour de force, but it could surely turn into a massive crowd-puller.(more)

A Greatest Hits Mixtape Of A Fading Superstar

Finally, you have a 70-year-old Khan in today's Bharat customizing Salman Khan's legacy by defying genetics (a 44-year-old Sonali Kulkarni is 53-year-old Khan's mother) and physics and logic to athletically beat up goons quarter his age.(more)

AN ENTERTAINING BUT EXHAUSTING ODYSSEY

Bharat is well-intentioned, entertaining and doesn't succumb to the trappings of commercial potboilers. The fact that it tries a bit too hard to prove that, is its problem.(more)

That is where Bharat and Zafar score. Despite knowing what the film is trying to do, in some cases easily guessing plot turns in advance, you cannot help but enjoy it. This one is an Eid winner. Bhai just got his mojo back.(more)

It's Not Salman Khan, It's Ali Abbas Zafar!

Bharat is no Sultan or Tiger Zinda Hai � it's the weakest film of Ali Abbas Zafar. The pace is the culprit along with the length. In order to keep something for everyone, Ali also keeps nothing for someone.(more)

harat is nothing more than a reflection of the times we are living in: where we expect our heroes to be flawless, virtuous fellas -- it is our current national disease.(more)

In the time of the Partition, but still dull!

Here was one opportunity to see history unfolding in its course which has been almost-forgotten by GenNext. Sadly, too many needless ingredients are crammed into long and dull storytelling! (more)