Viswasam is a safe film of sorts from Siva where he depends on the charm of his leading man and tries hard to keep the family audience happy. Not really a festival delight, but not a cause of concern either.(more)

Ajith's Viswasam is bundled commercially well with emotions and mass scenes. Pongal Treat for fans, Go for it!

Director Siva is very clear with his intentions who puts forth an entertaining rural action drama filled with family emotions and other elements. He understands the pulse of the fans and the family audience and delivers a entertaining product. It wouldn't be wrong if we label Viswasam as the best film, out of the four films from Ajith - Siva combination. In a nutshell, Viswasam is packaged with right commercial elements to satisfy the family audience and Thala fans.(more)

Ajith and Nayanthara are excellent in wasted opportunity

Viswasam is another opportunity wasted. Even after three attempts, it is quite sad to know that Siva hasn't cracked the success formula. After churning out an underwhelming spy thriller Vivegam, Ajith and director Siruthai Siva go back to the rural route with Viswasam. But the film does not do justice to expectations and is impressive only in parts.(more)

The plot becomes predictable once the real story unfolds. But the lack of evident flaws make it a one time watch entertainer.

The screenplay has been developed in such a way to please both the star's fans and family audience. There are scenes where Ajith fans go merry while there are ample emotional elements that go in tandem with the story. A message, too, is delivered towards the end. The film follows the regular template in its narration and changes track at a point keeping in mind to reach all sections of audience.(more)

Viswasam is a pucca family entertainer for this Pongal festival. Go and enjoy with your family!

While Viswasam is an engaging entertainer, it tests your patience with a predictable climax and screenplay. Technically Imman's songs are good and he shines in the background score department. Ruben's cuts are razor sharp and the duration is just perfect for a mass family entertainer.(more)

A Good Watch For The Pongal Season

Moreover, the film really does not offer anything fresh. However, these drawbacks are covered up by the superb father-daughter track. With its mass appeal and strong emotional connect, Viswasam makes for a good watch. The Thala army is bound to love it. Viswasam is a captivating film and it has plenty to offer the viewers.(more)

Despite a very predictable plot and an over-the-top climax, Viswasam has several moments worth paying a visit to the theatre. The bang for buck interval fight sequence in the rain is one of the highlights of the film. As a pair, Ajith and Siva make a strong comeback with the film, which has its issues but makes for quite an entertaining watch anyway.(more)

Viswasam is an out-and-out mass entertainer full of emotion and sentiment that would appeal to family audiences and Thala Ajith fans!

Loaded with emotion and action, the director has gone full out to generate mass appeal. However, there are a lot of scenes which remind the viewer of Ajith & director Siva's Veeram. There are a lot of elements that would definitely appeal to the B & C centres. The director has ensured that Thala Ajith's Mass shows in every scene of his. Watching Viswasam in theatres would surely be an amazing experience for the festive ambiance!(more)

In Veeram, Ajith protected his in-laws. In Vedalam, he protected his foster sister. In Vivegam, he saved his pregnant wife. In Viswasam, he protects his daughter. Ajith-Siva should consider saving the audience from bad movies by taking a very long break from each other.(more)

Yet Another Siva-Ajith Kumar Collaboration With Nothing New To Offer

Siva might need to look inwards, along with a brush up of filmmaking 101 and Ajith, probably outwards, in need of desperate reinvention.(more)

Siva completely takes the emotional route with the daughter connect as Viswasam is filled with sentiments and bonding throughout,with the so called villain taking a backseat, which could cater more to the family audience, than the fans of Ajith. All said, Viswasam is Siva- Ajith combo's emotional Pongal treat for families. (more)

Siva has managed to provide a well-packaged experience for this festive occasion.(more) 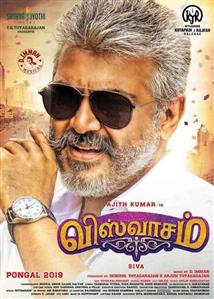