A very likable film is how you would define Kannum Kannum Kollaiyadithal. It is that rare film that remains low key but provides some solid fun.(more)

Kannum Kannum Kollaiyadithal works majorly due to the twists and Dulquer's performance. An interesting Gautham Menon moment in the preclimax acts as an icing on the cake.

Kannum Kannum Kollaiyadithal has its own issues but what's wrong in watching a harmless film that gives you a good feel as you walk out of the screen?(more)

The television anchor-turned-actor Rakshan makes his one-liners brings the house down. Ritu Varma of Pelli Chooplu-fame makes a terrific comeback and is impressive in the climax , while Niranjani Ahathian, as her friend, is equally good. Dulquer, with his icy cool looks and the way he takes control with his swag in the car heist job, is fab. However it is Gautham Menon who steals the thunder in a serious role with shades of dark humour.(more)

Lots of brains but no HEART!

The director's characterisation feels like a nod to the heroes in his own films, but it is only in the end, when we get a hilarious self-referential scene that delivers the film's biggest laughs, that we realise how well Desingh has played us with this character.(more)

Dulquer and Ritu's film is absurd and weird

Kannum Kannum Kollaiyadithaal is interesting in a few places, thanks to the cat-and-mouse game between the lead characters. If you are willing to look past the superficial elements in the film, there's a nice story lying there on the side.(more)

Rakshan is funny, and his chemistry with Dulquer is a treat to watch. Ritu Varma, in an impactful role, is extremely graceful and makes her presence felt. Her characterisation is multilayered as is Dulquer Salmaan�s. Spot on casting by Desingh Periyasamy! Harshavardhan Rameshwar�s music cuts no new boundaries but fits well in the narrative.(more)

Many Tamil films have attempted �cat and mouse� games (including last week�s disappointment Mafia: Chapter 1) but rarely have they actually ended up looking exciting on screen. Most times, what we get is a battle between a tortoise and a rock, never mind what the director had imagined. In Kannum Kannum, it isn�t just one cat and mouse in the equation but several; the soundtrack, background score and the slick editing add to the suspense in the narrative. (more)

I have seen similar Machi-Machi movies in Tamil which gave me a major headache with their absurd content. The lack of that annoyance factor in comparison with such movies is the reason why this review feels like a positive one even after saying that some of the scenes are difficult to accept.(more)

Derivative, Dreary, All Over The Place

The same plain face with no expression or muscle movement. Menon gets a mass introduction as a no-nonsense police officer picked out of any Tamil masala cop film. I waited till the end for him to utter "Naa ore oruthan. Ennaku bayame kadayadhu". Alas, it was not to be. Instead, the self-reflexive nature of the film goes elsewhere when it comes to Menon. Once again, I did not see this coming. Two high points, one unironic and another ironic, lasting a couple of minutes in an overlong drear fest.(more) 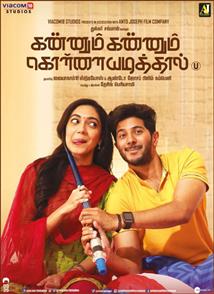