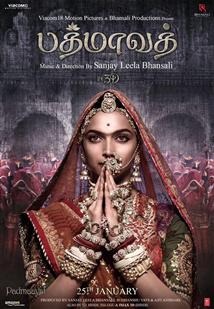 Indian Cinema is going places with Baahubali and now Padmaavat. The benchmark has been raised even higher by Sanjay Leela Bhansali. This film proves again that with the right director and capable actors, an Indian period film experience can be so rich in emotional value, conflicts, drama and of course entertainment.(more)

The high moments might be a few, yet Padmaavat is richly deserving of its acclaim.

There are a couple of high voltage action scenes, but one wonders if they could have been choreographed better; it doesn't excite you at any moment, maybe it is because we have seen similar battle scenes in Indian films in the recent past.(more)

Padmaavat's disturbing ideology misogynistic, communal and homophobic is bad enough. The final nail in the coffin is the lack of chemistry between Deepika Padukone and Shahid Kapoor, which made me long for the Aishwarya Rai-Hrithik Roshan pairing in the equally lavishly produced, vastly superior Jodhaa Akbar. Remember that scene in which Queen Jodhaa peeps out from behind curtains at the shirtless emperor? It was a scene crackling with electricity and longing. Watching Padmaavat's lead couple together though, I could not for the life of me understand why Padmavati gave a fig - or her life - for H.R.H Ratan.(more)

The director's expertise in heightening opulence and grandeur is well-known, further distinguishable in 3D. Cinematographer Sudeep Chatterjee compliments him by beautifully capturing some jaw-dropping scenery. However, the effects in the action/ war scenes don't meet the expectations raised by a film of this scale. Also, the songs don't do much to further the narrative other than providing visual delight. Granted, it could do with a tauter screenplay and shorter run-time but 'Padmaavat' is an entertaining, large canvas experience, brought to life with Sanjay Leela Bhansali's stroke of visual brilliance.(more)

India needs films like Padmaavat, we need directors like Sanjay Leela Bhansali. History or not; we are done looking up to the west to see grandiose opulent big budget films. We have enough history in each state that can be done on large scale films like this and still be enjoyed by everyone to know and visualize our country's rich traditional heritage. Threatening and protests will only curb such artist's creativity. Hopefully we get to see more films like this without any issues.(more)

It's pretty and partly absorbing but not quite exhilarating

The makers should know that quality trumps quality when it comes to special effects. The clunky CGI in the film is pretty awful and distracting. The inconsequential 3D effects and a glossy crowd-wowing star spectacle make 'Padmaavat' look like pure product which manipulates the audience to love it. But the fact is, it lacks the real depth and hence the high of watching a good piece of cinema.(more)

Padmaavat has raised the bars in terms of cinematography, music and production design, the film has authentically registered the richness of Rajput Kingdom, the lifestyle of Khiljis and their practices. Though the film�s runtime is 163 minutes, it engages you from the start to the end. Special mention to the team who is in charge for the Tamil dubbing, they have done a brilliant job and in fact, we slowly begin to feel as if we are watching a direct Tamil film. Overall, Padmaavat is a must watch and movie lovers shouldn't miss it at any cost.(more)

an insipid love letter to Rajputs

In Padmaavat, however, neither does he manage to hit the right notes when it comes to the soundtrack nor is there a single sequence which lingers on. No character reaches out; no moment is able to move you. Padmaavat may well be Bhansali�s most sterile and insipid outing since Saawariya and Guzaarish. It manages to wear down and exhaust rather than engage.(more)

The problem lies not in Padmaavat being a costume drama, but in the fact that there is too much costume, too little drama. In the film's opening scene, we see a king chewing roughly on a piece of poultry. This is a surprisingly small, tandoori-sized handful of bird, nothing compared to the way we have, in international film and television, watched vikings gnaw at giant animal legs the size of motorcycles.(more)

Nothing new to offer

The 'good' Hindu hero, mostly dressed in creams and whites, is heroic and honourable; the 'evil' Muslim villain, mostly dressed in black, is shown to be animalistic, with no control over his desires, be it political or carnal. A romance with his male slave, Malik Kafur -- Jim Sarbh, who seems confused as to whether he is acting in a film or performing in a play -- otherwise hinted at, is clearly outlined when Ratan Singh's minister disparagingly refers to him as Allaudin's begum.(more)