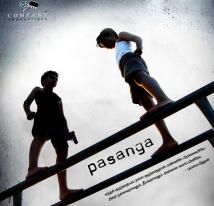 Pasanga for pasanga and parents

Screenplay appears to be disjointed. Dialogues are laudable and camerawork is praiseworthy. Music is hummable. Director Pandiraj should be credited for extracting work from children. If few foibles had been avoided Pasanga would have made a special mark. (more)

Debutant director Pandiraj has exhibited a sound understanding over the medium and has extracted work of high quality from his star cast. James Vasanthan excels through his musical score, according a nice feel to the proceedings. (more)

Pasanga (Kids), directed by debutant Pandiraj is an unadulterated delight. Pasanga wins because it's not just a fairy-tale; the children in it are really children, with their own jealousies, problems and unique viewpoints. The screenplay moves steadily, filled with enough pep and enthusiasm to sustain the viewer.(more)

First of all, kudos to Sasikumar and Pandiraj for selecting the perfect cast for Pasanga. The performances of all the actors and actresses including the children deserve a standing ovation. Pandiraj's excels in his narration style, screenplay, dialogues and direction. Music by James Vasanthan is one of the biggest pluses of the movie. Overall, Pasanga is technically brilliant. (more)

Striking a smooth balance between real and fantasy elements, Pasanga is rare in the sense it is for the children and by the children, which is convincing and clear from the word go. What is praiseworthy is the director’s faith in casting all newcomers and extracting the best from them. All credits should go to Sasikumar, who has made a real bold attempt by producing such a film. It is simple, straightforward and scintillating. (more)

‘Pasanga’ is a very different attempt by first timer Pandiraj. Many messages are interwoven into this drama. The authenticity of the near-new cast is appealing. The strength of the story and treatment lies in the fact that children remain children till the very end. They do not talk or act beyond their age. Plaudits to Pandiraj — at no point does he forget ‘Pasanga’ is a children’s film in every sense of the term. (more)

There are no dialogues with double entendre, there is no exaggeration of emotions, but it is not wanting in romance, family sentiment, or humor at the same time. The magic here is a good story, a fairly consistent screenplay. There are quite a few rib-tickling one-liners. The entire cast is new, and all of them have performed like seasoned actors, even the tiniest tot.(more)

Excellent - A small film with a very big heart.

The real hero of Pasanga is its script, remarkable and rooted to its milieu. All this comes with top class performances from all the artists in the film. The music of James Vasanth suits the mood of the film with top class background score. Pasanga is a masterpiece, which Tamil cinema can be proud of, and should be compulsory viewing by all who support and love good cinema. (more)