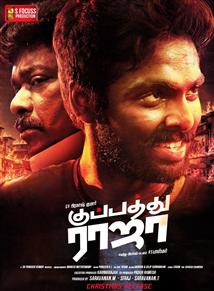 A Typical Commercial Pot-Boiler That Loses Out On Engagement

A film with all possible commercial elements that lacks the required execution!(more)

Kuppathu Raja also does little to set right Tamil cinema's misguided portrayal of North Madras, and continues portraying the neighbourhood as one where everyone is perennially drunk or getting into scuffles. With a lead character named Rocket, the aim must have been for the skies. But the film is far off target.(more)

Though a few characters have been etched out decently, the film doesn't offer anything new. The plot could have been developed in a more intriguing way with interesting action and suspense elements. A twist which comes towards the end is pointless in an otherwise predictable screenplay.(more)

Go for it if you are a hardcore GVP fan and also have a weakness for North Chennai flicks.(more)

Kuppathu Raja isn't everyone's cup of tea and might just appeal to a certain section of the audience who would be ok with the movie's genre. (more)

If you are looking for something positive in the film, it is Mahesh Muthusamy's camera and recreation of North Madras with sets that look authentic, including the narrow streets. Praveen KL�s cuts give a pacey feel to the 126-minute film. The songs and fights are spread across the film and at times, appear out of nowhere. GV Prakash, after his brilliant performance in Sarvam Thala Mayam, is wasted in Kuppathu Raja. Yogi Babu does his regular walk in the role of a comedian, but the jokes fall flat. Parthipan and MS Bhaskar do what is expected of them.(more)

We recommend that you carry an Asprin!

Kuppathu Raja is a highly predictable revenge thriller which is neither entertaining nor innovative.(more)

This is how you waste a Rajinikanth title!

Avoid this below-the-belt awful mess. One minute of silence for me who thought there was a story in Kuppathu Raja.(more)

A Boring Film That Comes Together Only In The Climax

If Prakash Kumar doesn't change his game sooner or later, it'll become difficult for him and the audience that pays to watch him on the big screen(more)