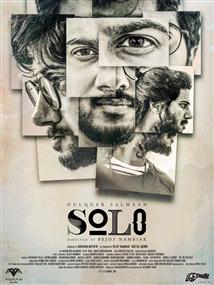 Most of the segments in Solo strike a chord with their serene and thrilling moments and the movie can be a delightful watch, if you are in a mood to explore something different.(more)

Solo is a progressive film and what helped the director to present his thoughts would be his extremely talented technical team. Solo's soundtrack has about 22 songs composed by 12 music directors. The music is probably the soul of the film. Girish Gangadharan�s cinematography is another major boost to Bejoy. Art director Amaran deserves a special mention.(more)

Different from the word go

Watch Solo if you want to experience a different viewing.(more)

Dulquer Salmaan and Bejoy Nambiar's film is terrific in parts

Maybe the film should have been simpler in terms of its screenplay. Maybe it has to do with Tamil dialogues that are a big let down. Maybe there's something lost in the emotional quotient. Maybe Solo has a lot of unexplored 'grey' areas. For instance, a gangster repeatedly asks the henchman to sing an MGR song, but why? How terrific would Solo have been, had Nambiar addressed all these maybes?(more)

Solo, undoubtedly, is an ambitious attempt but it's a great concept gone awry. Two of its best stories could be knitted together and made into a standalone film. The result might have been even more interesting and exciting.(more)