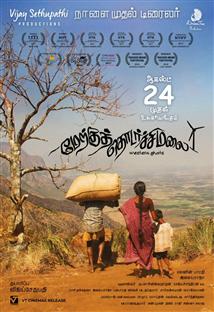 The First Detour Of Tamil Cinema To Its Roots

In the times of 8-Lane Roads in everyday discussions that's looked up as an evil in disguise.. Lenin Bharathi voices out a strong take with his film. Between documenting and being a film, 'Merku Thodarchi Malai', undoubtedly presents you a hard hitting, unheard experience which is beyond everything else.(more)

Merku Thodarchi Malai is an honest portrayal of a livelihood that had begun to become extinct. Lenin's honesty translates into no-frill cinema -- it doesn't go out of its way to �entertain� you.(more)

Merku Thodarchi Malai non-decoratively depicts the exploitation of labourers. That makes it important. And in a country with a rabid obsession for development, the film comes across as necessity because Lenin seems to be asking, "When you say 'development', whose development are you talking about?"(more)

The film ends with a bang (even while the filmmaking remains low-key) even as it subtly delivers its message - how development also leads to the destruction of a way of life and a community.

This is all the more relevant in these times of express highways marketed as green corridors. The zoom-out technique, which was used to give us the breathtaking view in the earlier scenes, is employed to even greater effect, leaving us with a punch in the gut.(more)

Merku Thodarchi Malai is an honest attempt with unusual depth in writing.

If you can ignore the slow pace of the film, the director takes you to a different world through his story-telling and Theni Eswar's striking cinematography(more)

Not your typical commercial film

Merku Thodarchi Malai's biggest strength is undoubtedly cinematographer Theni Eshwar, his frames and camera angle effortlessly travel with the characters. Music by Ilaiyaraaja is just functional and nothing extraordinary which is quite unusual for Isaignani�s standards. In various places, Eshwar has used the aerial shots and each time it gives different emotions. In one top shot, we get to see the passion and faith of a hard-working old man and the climax aerial shot leave you speechless, we are just get sucked by the emotions and grief of Rangasamy who lost all his hope, watches all the merciless things happened to him without even saying anything justifying his watchman job.(more)

Directed by Lenin Bharathi and starring Anthony Pangu and Gayathri, this is a strong, stirring, beautifully shot portrayal of life in the Western Ghats

Merku Thodarchi Malai is immensely moving. In one of the expanded-time segments, we see Rangasamy's uphill climb up to the plantation. Names of places (Kombai, Thevaram) keep appearing in a corner of the screen, like how a Hollywood adventure would say "Berlin" and "Morocco." It's like a Virtual Reality trek. (more)

A not to be missed socially relevant script that is approached very realistically.

Merku Thodarchi Malai story is very hard-hitting, thin line explores an undeniable truth. The screenplay is to the point, made without any compromise to fit the commercial angle. The filmmaker in Merku Thodarchi Malai has incorporated various important details in a subtle manner. Raasi Thangadurai�s dialogues are extremely natural and stand as the unique selling point. (more)

Places Tamil cinema on a pinnacle

Go for this exceptionally good film that raises the prestige of Tamil cinema on the world stage.(more)

A Rustic Portrait Of Life On The Mountains

There are owners who war over ideals, a benevolent comrade who forsakes his kin for the greater good and the welfare of his workers, and an old woman who wants to get her granddaughter married but needs to sell her land to do so. It's all set amidst a beautiful landscape that rings with the chirp of crickets and the sounds of the forest. So much so that when the frames descend into the concrete jungle - or whatever little of it that the film chooses to show - it comes as a shock.(more)

A classic piece of art on celluloid

The director has totally done away with close-up shots, which reduce the impact of the scenes. Also, the deliberate slow pace lends to the feel of a documentary. Nevertheless, with several pluses, Merkku�.is a path breaking honest attempt, which is not to be missed!(more)