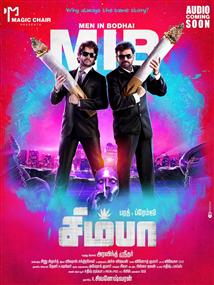 A Brave Attempt On The Life Of A Stoner With Limited Grip!

Simba does have a few worthwhile moments and the humour works here and there. As the entire film is predominantly based on comedy, Premgi does good justice with his reactions, one-liners and dog like mannerisms that would be appreciated by many of those who like these sort of different films. Also, the stoner moments of Simba, though seldom, would serve as a fresh idea to a few. If for a more convincing storyline in the second half and an exploration on the idea of stoning, Simba would've come across as a very uniquely made engaging film. Nevertheless, it does engage you in parts and is a passable yet very different and brave attempt.(more)

The plot is too thin, and so, very often the film resembles a short film stretched into a feature-length film.

Even the novelty of seeing Premgi, who tries to make things funny even with the limited material, playing a dog wears off after a while.(more)

A quirky stoner comedy that fails to hit the 'high' notes

Though the film has a plethora of insanely funny elements providing constant laughs, the hiccups to the fun come in the form of inconsistency in the screenplay. (more)

Simba is quirky and creative but doesn't completely give a satisfying stoner experience.

Having a creative one line in the hand, the director could have explored a fresher and exciting premise, than opting to travel on the tried and tested romance genre. With more intensity in the emotions, the overall feel of the film would have attained completeness. (more)