Charles has been able to strike a chord whenever there is an emotional scene. The reason is that these peaking instances do not happen all of a sudden and we are shown the background of the characters and every important sequence that contributes to the crescendo. And the best part is that the acting in these sequences remain subtle. (more)

Antony, the producer and director of popular talk show 'Neeya Nana' steps into the big screen as the producer of this film. Let's see what the film has in store.The best part is that the film does not pass judgment on anyone and all the characters have been presented with fairness. The situations are mostly close to reality. Beyond these plusses, the film has a considerable share of clich�s, melodrama, predictability and convenient turns.(more)

Azhagu Kutti Chellam is meant for the love of infants, it is beautiful too! But lacks gloss.

The script of AKC is based on the 'butterfly effect' and many coincidences which keep happening in succession (more so after the intermission) thereby affecting the characters in the film. Ultimately, the tale is resolved in the best interests of all, with all emotional gaps being filled. (more) 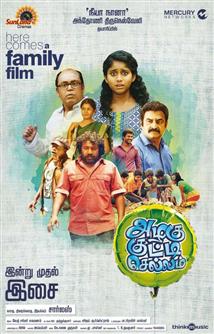